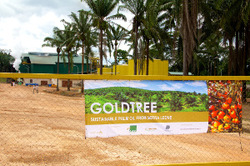 While other investors are reconsidering their investment in Ebola hit West African countries, palm oil Company, Goldtree has recently committed $18.3 million to expanding its existing operations in the Kailahun district of Sierra Leone. This will increase Goldree’s overall investment in Sierra Leone to $42 million.

Kailahun, one of Sierra Leone’s poorest districts is also one of the country’s Ebola epicentres. With a workforce of 500 people, Goldtree is the area’s largest employer. Its sustainable enterprise model further supports an extensive agricultural community, by buying in fruit from over 9,000 local out growers. The company’s considerable investment is intended to ensure much needed economic development in the area and set Sierra Leone on the path to becoming a significant exporter of palm oil in the country’s post-Ebola economy.

Welcoming the move by Goldtree’s board, the Minister of Agriculture, Forestry and Food Security, Dr Joseph Sam Sesay said that the Ebola epidemic would be contained and that Sierra Leone’s long-term economic outlook remained healthy. “Goldtree’s investment gives a vital boost to the country’s agricultural sector, which remains the largest sector of the Sierra Leone economy. Kailahun, the host district of Goldtree, has also been the worst hit by the negative impact of Ebola. Lost GDP in Sierra Leone due to Ebola could reach $439 million according to expert analysis. In Kailahun a good number of farmers have abandoned their land to move to non-affected areas. Goldtree’s timely investment will help protect Sierra Leonean livelihoods today and kick start tomorrow’s economic recovery. It also sends a clear message to the world that Sierra Leone remains open for business.”

Goldtree was established in 2007 by Pan African Agriculture which raised further funds from the African Agricultural Fund (AAF) and the Finnish Development Fund in 2009.  AAF is a development fund based in South Africa, funded by the Overseas Private Investment Corporation (OPIC), DfID and the Spanish Agency for International Development Cooperation (AECID) amongst others. The Goldtree board consists of shareholder representatives plus three local businessmen, John Bonoh Sisay (CEO of Sierra Rutile), Andrew Keili (Executive Director of CEMMATS) and Mustapha Turay (Resident Director of Diamond Counsellor International).

The company has agreed an immediate contribution of $3.3 million to meet current expenditure and mitigate the economic impact of Ebola. The remaining $15 million will fund an expansion programme which includes extending the company’s plantations, doubling the size of its dedicated palm oil mill and building a tank farm at a port in Sierra Leone for the export of palm oil.  One million dollars has been earmarked to increase fruit yields by developing the skills and farm management practices of local farmers.

Speaking on behalf of the Goldtree board, Luke Marriott said that the company was committed to being part of Sierra Leone’s long-term economic development: “Goldtree has made a commitment to the people of Kailahun which we believe we can best fulfil by looking beyond the country’s current difficulties to its post-Ebola potential. The Sierra Leone government’s Agenda for Change supported our initial investment in this region. We anticipate that under the Agenda for Prosperity our planned expansion programme together with increasing industrial production and higher sales from artisan producers, aided by the improved road network will not only support Goldtree’s growth prospects, but also enhance our ongoing programme of skills development and skills transfer. Sierra Leone has a bright future as a major exporter of palm oil within the region and this investment signals our continued belief in the development of Sierra Leone and its Agenda for Prosperity. It also signals that in spite of the Ebola scourge, economic activities and investments are going on albeit with some restraints.”