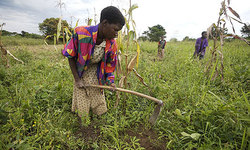 African agriculture and its farmers are evermore under pressure to maintain local food systems that produce culturally adapted food. For decades African agriculture has been in dire need of investment. In the latter half of the 20th century, investment came to the continent, but it was not targeted at African farmers. The current flow of agricultural investment is focused just on export-based industrial agriculture, while smallholders and family agriculture remain deprived of investment. In this brief article we will try to articulate under how much pressure African farmers are from the vagaries of international markets as well as international policies.

The Financialisation of the food system

To understand the recent rush for farmland and the concomitant capture of food systems, one should bear in mind that both land and food have increasingly become attractive financial assets. Increased food demand, mainly due to increased meat consumption in emerging countries, food scarcity due to increasing population and high, volatile food prices present opportunities for investors. As a consequence, the agri-food and agrofuel companies have attracted more capital and so are increasingly under pressure to increase returns for their shareholders/investors.

Why this sudden surge in investment in food markets? When the subprime mortgage crisis hit the financial sector in 2007, investors took their money out of the real estate market and looked for “safe havens”. They poured their money into the global food market in order to make fast profits. Massive capital is invested in the commodities/food futures market, in particular in food futures which are contracts concerning the sale of food at a future date. In search of short-term profit, investors bet against the future price of food without any food actually being traded. This increases future food prices, but also pushes up current food prices[1]. As a consequence of massive food speculation, the prices of staple foods such as wheat, maize, rice and soy increased very rapidly[2] in 2008 causing food riots in several countries. So, the food crisis of 2008 found its origins in the subprime mortgage crisis of 2007.

Likewise the value of land is expected to rise which is why it attracts profit-seeking investors around the world. Companies, banks, investment firms and pension funds are investing directly in farmland in developing nations where investors establish large-scale industrial farms for the purpose of exporting the food and energy crops (biofuels). The prospect of high profits from food markets has also stimulated speculative investment in land. On several occasion investment firms have bought up land without putting it to productive use, because they are merely looking to profits from the future sale of this land. Often companies buying or leasing land are involved in complex corporate structures also involving shell companies based in tax havens. This leads to tax avoidance which hurts the  treasury of the country where the land is bought.

So the influx of massive capital means that the agri-food sector is dominated by a financial logic of increasing shareholder value and high financial returns. This erodes the basic function of the food system: to provide sustainable healthy food for all. This financial logic drives many players in the food system to pursue an expansion strategy that aims to acquire control of all parts of the system (production, processing, trade and retail) in order to wield most power in the market. The agribusiness also wants to increase its market share by increasing sales. In agriculture this often means increasing yields / production (productivity agriculture). In the end this will lead to the ever greater concentration of resources and land in the hands of a few players on the market and at the expense of family farmers.

Trampling Family Farmers with the help of Donors

The aim of agribusiness companies investing in African land is to satisfy demand in rich consumer markets. So the market will not allocate food to the most needy, the hungry. What is more, agribusiness receives encouragement and backing from international policy makers. Consider the ‘Doing Business’ ranking of the World Bank, the public support awarded to agrofuel companies in Europe and the USA and the promotion of Public-Private Partnerships in agriculture via the G8’s New Alliance for Food Security and Nutrition. For instance, via this New Alliance, companies have received concessions from African governments, such as reforms in land, seed, tax and trade laws, which will increase their market share. These policy reforms are mainly to the advantage of large corporations because their grip on land, water, seeds and other natural resources will increase at the expense of small-scale family farmers.[3] More and more land is being grabbed in Africa and more and more small scale farmers are being dispossessed and so lose the very basis of their livelihoods and existence. This is clearly harming food security as much more African farmland is diverted away from local food production towards the industrial production of agricultural commodities for export, biofuel foodstuffs, mining, and forestry.

Also, the G8’s New Alliance fully adopts the productivist approach in its policymaking stating that increasing agricultural productivity will lift 50 million out of poverty in 10 years. This unique focus on food production ignores the important aspect of food distribution: the amount of food people can access through their own production or by buying it on the market. So there will have to be a strengthening of local food producers and a fight against rural poverty. Furthermore, it also largely overlooks the key role family farmers play in securing food security and food sovereignty in developing countries. They represent about 90% of all farms worldwide and provide 70-80%[4] of all food - for which they use less than a quarter of the world’s farmland[5]. For Africa, this figure is more pronounced as family farmers control only 15% of the farmland. New data by GRAIN illustrates moreover that small farms across the world are more productive than big ones.[6] Therefore an unbalanced focus on industrial agriculture is likely to undermine people’s capacity to feed themselves and as this form of agriculture is largely export-focused and mechanized it will contribute little to improving employment and food availability at local level. This will further deepen developing countries’ dependence on imports from volatile international markets.[7]

To improve food security, public investments should be targeted at the current principal food producers, family farmers. Public authorities should envisage creating decent work for the existing rural population or support them so that they can increase their productivity. Securing access to land, water and credit for family farmers as well as improvement in public services to rural communities will increase food production, create income opportunities for the rural youth, foster rural development and reduce the number of rural poor. Access to local markets is crucial in this respect.  Enhanced storage capacity and improved transport infrastructure linking rural to semi-urban and urban areas will strengthen the functioning of local markets (allowing more processing of products in Africa), in turn improving market access for the small-scale farmers, who will be enabled to make additional investments to increase their production.[8]

[1] Reuters, “Man Commodity Algorithm Fund Allows Human Element”, http://www.reuters.com/article/2012/03/15/uk-commodities-mangroup-idUSLNE82E02G20120315
[2] Sometimes these prices doubled within a couple of days.
[3] Global Policy Forum, 2014, “G8 New Alliance for Food Security and Nutrition Not Supportive of Small-scale Food Producers”, https://www.globalpolicy.org/component/content/article/270-general/52686-g8-new-alliance-for-food-security-and-nutrition-not-supportive-of-small-scale-food-producers.html
[4] Timothy Weis, 2014, “Feeding the World: The Ultimate First World Conceit”,  http://triplecrisis.com/?p=10599&;utm_source=GDAE+Subscribers&utm_campaign=c1a7982a4f-TCB_Feeding_World_10_6_2014&utm_medium=email&utm_term=0_72d4918ff9-c1a7982a4f-52155913 Oakland Institute, 2014, “Press Release”, http://www.oaklandinstitute.org/worldvsbank-press-release
[5] Grain, 2014, “Hungry for land small farmers feed the world with less than a quarter of all farmland”: http://www.grain.org/article/entries/4929-hungry-for-land-small-farmers-feed-the-world-with-less-than-a-quarter-of-all-farmland
[6] Quote GRAIN study: “Although big farms generally consume more resources, control the best lands, receive most of the irrigation water and infrastructure, get most of the financial credit and technical assistance, and are the ones for whom most modern inputs are designed, they have lower technical efficiency and therefore lower overall productivity. Much of this has to do with low levels of employment used on big farms in order to maximise return on investment.
Beyond strict productivity measurements, small farms also are much better at producing and utilising biodiversity, maintaining landscapes, contributing to local economies, providing work opportunities and promoting social cohesion, not to mention their real and potential contribution to reversing the climate crisis.”
[7] Institute for Agriculture and Trade Policy, 2013, “Land Grabs and Fragile Food Systems”, http://www.iatp.org/files/2013_02_14_LandGrabsFoodSystem_SM_0.pdf
[8] ActionAid USA, 2013, Factsheet http://www.actionaidusa.org/sites/files/actionaid/newalliancefactsheet_0.pdf