The march to progress in the Philippines 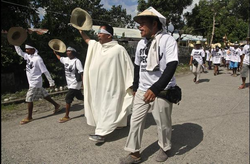 The march to progress in the Philippines

A tribesman leads his village in resisting a development project that promises progress but threatens his tribe.

Vic is one of 120 people from Casiguran, north of the Philippines, marching across the country to protest a controversial land development created by a powerful political dynasty.

The development promises to bring economic progress with resorts, an airport and factories. Construction has begun, destroying ricelands and displacing fisherfolk. If the development carries through to completion Vic and his tribe will be one of 3,000 families stripped of their land and livelihood.

Will the president hear a tribal man's plea to stop the development from going ahead?

I first stumbled upon this story four years ago. My husband, a human rights lawyer, told me about a remote village in Casiguran, Aurora province where farmers, fishers and indigenous peoples needed legal help. They were protesting a massive government project called Aurora Pacific Economic Zone (APECO).

APECO covers 12,923 hectares and would build an airport, a seaport, resorts and factories. It promised jobs and progress in the once sleepy town of Casiguran. But the project was mired in controversy.

Ditsi Carolino is an award-winning documentary director/producer based in Manila. She studied Sociology at the University of the Philippines and documentary filmmaking at the National Film and Television School in the United Kingdom. Her student film, Life on the Tracks (2002), was an intimate portrait of a couple who live in the slums of Manila. It screened at IDFA, Sheffield, HotDocs and won the Royal Television Award for Best Student Factual Film in the UK, Best Documentary at Cinemanila and was acquired for broadcast by the BBC. In 2004 Bunso (The Youngest), won Best Director at the One World International Film Festival in Prague, the Youth Jury Prize at the Human Rights Film Festival in Nuremberg and the Grand Prize at the EBS Int’l Doc Film Fest in Seoul. In 2005, Ditsi received a grant from the Asian Cultural Council to explore documentary filmmaking in New York.  She is currently based in Manila, working on several feature-length documentaries

Pabelle Manikan is a documentary filmmaker based in Manila, Philippines. She graduated with a degree in Digital Filmmaking at De La Salle College of Saint Benilde. After college, she was involved in making documentaries on Philippine socio-political and cultural traditions. Her first documentary short, “Bukang Liwayway” (2012) was supported by the Goethe Instut of Manila and DocNet summer school in Vietnam. Currently, she works as a full time documentary film editor and does freelance jobs as a director and director of photography.

"They say APECO will bring progress. But we feel this progress is not for us," said Vic, a Dumagat, an indigenous group who have lived there since the 1900s. They subsist on hunting, gathering and fishing and need vast forests and coasts to survive.

Vic puts on a broken pair of eyeglasses and shows us APECO's plan to build resorts where they live and a big port where they fish.

Fr. Joefran Talaban, the town's parish priest, is the most vocal critic of the project. "APECO is an unjust law. It promotes a wrong kind of progress where the indigenous people, fishers and farmers are not consulted, he says"

Under the Philippine constitution and the indigenous people's rights law, no project, can enter ancestral lands or waters without the free, prior and informed consent of the community.

Villagers protested that they were never consulted about the project. Some farmers lost lush, fertile ricelands as APECO built roads and buildings. Fishing families who lived by the sea had to tear down their homes to make way for an airport. Even the town mayor complained that he and other officials were not consulted, a violation of local government laws.

But the creators of APECO, Senator Edgardo Angara, his son congressman-now-senator Sonny Angara and his sister congresswoman-then-governor Bellaflor Angara, are powerful and well-entrenched.

It was going to be a difficult fight for Vic and other oppositors to APECO as they exhausted all means to fight for their land - dialogues, congressional and senate hearings and protest marches over a period of four years.

I asked Vic where he found the courage to speak to the president like that and he said: "We walked for 17 days to tell the president what we felt. So I did."

Vic was not a tribal chief. He was an ordinary tribesman who finished grade one in school. But his practical wisdom and the slow, dignified way he spoke reminded me of much-revered chieftains, long dead and gone but well remembered for the way they led their people against "development" projects.

While he was fishing, he told us how much the Dumagat valued their freedom. "If we work in the APECO factories, we work for a boss. In our ancestral land, there is no boss."

Another time he was foraging for food in the forest. "Everything we need to survive is here. If we nurture our forest and seas, it will sustain our needs. The life of the tribe is simple. We are able to eat everyday. Our huts are small but we are happy."

Ultimately Vic makes us wonder about the big questions at the heart of this story: What is progress? Who defines it? And who really benefits from "development" projects?