Where’s the evidence that land grabs are good for economic progress? 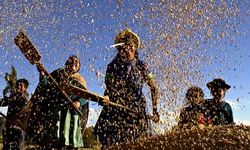 Where’s the evidence that land grabs are good for economic progress?

The Rights and Resources Initiative (RRI) and the Munden Project, have not been resting on their laurels since delivering an important study last year on the business costs associated with land grabs.

They have turned their focus on 73,000 mining, agricultural and logging concessions, in eight countries but mostly in Peru and Colombia, and found that almost all of them are inhabited (93-99%, depending on the data source).

This blows out of the water any idea that such projects are victimless; extrapolate this globally and many millions of the world’s poorest people face existential threats to house and home.

So what to do?

The first thing is to get the facts straight on the development benefits of such projects. Obviously, the driving factor behind them is profit – there is big money to be made, as a recent report by Grain, a research group based in Barcelona, makes depressingly clear.

Powerful companies and their supporters, including governments and a host of international experts, argue that such concessions bring jobs, taxes and multiplier effects for the countries concerned, and even for the people at risk of displacement.

Clearly, claims by companies should not be taken at face value. The incentives for them to make that case are obvious – the kind of thing Naomi Klein might bluntly dismiss as “essentially a cover story for greed”.

But the views of (often democratically elected) governments and experienced researchers should be listened to. Are remote communities holding back the development of their countries by resisting money-making opportunities, as bureaucrats often claim? Should they move aside for the good of the whole population?

Answers to such questions are complicated, but the policy response turns out to be surprisingly simple. And somewhat refreshingly we can turn to the aid debate’s great antagonists, Jeff Sachs and Bill Easterly, for a common line.

It was Sachs who worked up and popularised (in a 1995 study and since) the theory of a resource curse, whereby, paradoxically, countries with an abundance of natural resources have weak economic growth.

This counterintuitive, but very well substantiated, analysis is seldom heeded by governments keen to earn exports dollars fast, often for good reasons. And on issues as complex as economic growth it is hard to make reliable generalisations. But that, in fact, is also the point, and it is where Sachs’s nemesis comes in.

Easterly’s latest book, the Tyranny of Experts, has many flaws, but one thing he does well is to profoundly question the confidence of economists and politicians about what does or does not promote growth.

The reality is that, on balance, we know very little about what causes growth. Commodity exports play a part, of course, but we do not know precisely what part, and swift growth today can easily be reversed tomorrow, with much the same policy regime in place.

This is where Easterly’s second point comes in. The logical conclusion of this uncertainty about the development impacts of particular policies or projects is that the presumption should be against undermining people’s rights. It is a kind of precautionary principle for human rights.

If we are sure that moving people off their land to develop it for export industries is going to be beneficial for the country, then there is at least a case that such upheaval for some is the unfortunate price to be paid for the progress of many.

But if we are far from certain about the national benefits even in terms of economic growth, let alone growth equitable and sustainable, then there can be no justification for such devastating decisions. The only circumstances in which development could take place, under this logic, would be with the full consent of the communities affected.

And this is the area that the Munden Project/RRI report homes in on, identifying late communication and a failure to follow the principle of free, prior and informed consent as prevalent across the examples studied.

The case for moving people from their land is further undermined by the tactics used by most companies – if it were really such a good option, why are so many deals done in the shadows?

So, despite the complicated debates about what spurs growth and development, the policy response to these cases is simple – stand by the local communities and ensure their rights are defended.

Not because they have the God-given right to stay in their land forever at the expense of national development. But because there needs to be exceptionally strong evidence of wider positive impacts to justify such disruption to people’s lives. And that evidence does not exist.