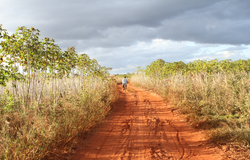 Lands of the community of Nova Vida, which are being claimed by the company Agro-alfa, Itoculo Administrative Post, Monapo District, Mozambique. (Photo: ADECRU)
ADECRU | 6 October 2014 | Portguese

More than 250 farmers from across the country gathered at the Third International Peasants Conference on Land, held on October 1 and 2, with the aim of deepening the public and democratic debate on the structural challenges facing agriculture and of denouncing the policies of the candidates running for President of the Republic, who ignore and marginalise small scale agriculture in favour of large scale agribusiness.

"Experience has shown us that large scale farming harms small scale farmers. It is we peasants who feed this country and not the companies that produce cash crops for export and  usurp our lands, increasing the incidence of poverty amidst our communities" But these candidates for president ignore such facts", said Rabeca Mabui, Vice-President of the Peasants Union for the Province of Maputo. "All the candidates say they want to mechanise agriculture, creating large farms, but they forget that mechanisation of agribusiness does not create jobs, will not lead to a commitment to small scale agriculture through access to credit, seeds adapted to climate change, government extension services, or support for marketing and agro-processing".

Peasants in three regions (North, Centre and South) of the country reported cases of land grabbing, that is taking on alarming proportions in the northern region, in the so-called Nacala Corridor.

The Nacala Corridor has exceptional conditions for agriculture, with average rainfall ranging between 1,030 mm and 1,225 mm. Slightly more than 5 million farmers in teh region are responsible for produding more than one-third of the country’s total grain production and about 38% of the pulses produced in the country.

These exceptional agro-ecological conditions in conjunction with logistical conditions (such as a 912-km railway line that crosses the corridor, and the Port of Nacala) have been attracting huge international agribusiness corporations, many of which are associated with the ProSavana Programme and the Nacala Fund. 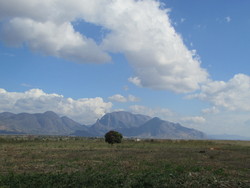 Lands usurped by the Mozaco Company in Zone III of ProSavana, Natuto village, Malema District, Mozambique (Photo: ADECRU)
Farmers have indicated that the arrival of these investments pushes communities to less fertile lands, desroys the social fabric of local communities and people's’ livelihoods, leading to increased poverty. It is important to recall that small farmers are responsible for producing more than 90% of the food in Mozambique and represent about 81% of the economically active population.

Land grabbing is happening throughout the entire country, while the investments come through alliances with the country’s political and economic elite, bypassing the land legislation.

Costa Estêvão, President of the Peasants Union  for Nampula and the representative of the Northern Region at the conference, denounced Agro-alfa, a company active in the District of Monapo in Nampula province, which grabbed 650 ha from the Nacololo community for soybean production. ADECRU activists in Nampula have ascertained that the same company is facing strong resistance from the community of Vida Nova in Meruto village, where it is trying to grab the lands of two former colonial farms of approximately 1746 ha that were occupied by the community after national independence in 1975, just as the community had done with a 650 ha block at Nacololo.

Estêvão also denounced the company Mozaco, which last year ousted about 1000 farmers from their land where they grew various crops for their livelihoods. Information confirmed by ADECRU indicates that Mozaco (Mozambique Agricultural Corporation) is a company created in 2012 through a partnership between the Mozambican group João Ferreira dos Santos (JFS) and the Portuguese group Rioforte, which is the investment arm of the Espírito Santo Group. Rioforte owns about 168,000 ha of land in Brazil and Paraguay, being used for livestock farming. In Mozambique, Mozaco obtained the controversial 2,000 ha in Zone III of ProSavana, in the District of Malema, Rucha community, in the village of Natuto with intentions to expand this to 20,000 ha for soybean production. Mapping done by ADECRU foresees that the lands of more than 4,500 families will be taken over by Mozaco.

Matharia Empreendimento, a company that received funding from ProSavana through the ProSavana Development Initiative Fund (PDIF), usurped land from more than 200 families in the district of Ribaué, Administrative Post of Iapala, Matharya community, to make way for soybean production. PDIF initially provided a package of US$ 750,000 through the Counterpart Fund (Mikaeri Shikin, in Japanese), which aggregates funds from the Japanese Food Aid (KR), as part of the Official Development Aid (ODA). Costa stated that the population is currently asking the owner of Matharia Empreendimento for land for the production of food, seeing that other than the land that was taken, there is no more land in adjacent areas where they can produce food.

Costa added that there is a new project called the Lurio River Valley Development that will be implemented in three provinces, namely Niassa, Cabo Delgado and Nampula, with greater focus in the Province of Nampula, where it will be implemented in four districts. This project was presented on the 28th of last month (September) and the plan already makes provision for the removal of farmers from their land to unknown or infertile land.

"Wherever it goes, the government is promising jobs to the natives, but when we visited the companies, we did not find any natives working there. Each day land is being occupied, resources are being extracted and exported and consequently farmers are becoming poorer and more disadvantaged. What kind of development is this?" said Costa.

Helena Terra, Vice president of the Peasants Union in Zambézia, who spoke on behalf of peasants from the central region on the Scenarios Panel at the Third International Peasants Conference on Land, said that the farmers of the country were being taken from their land without due community consultation. Terra pointed out that at the Districts of Namaroi adn Ile approximately 180,000 ha had been occupied by the company Portucel for eucalyptus and pine plantations, areas where before farmers produced their food.

Portucel is a Portuguese company that on 19 December 2011 was granted the Right to Use and Exploitation of the Land (Direito de Uso e Aproveitamento de Terra – DUAT), in terms of Resolution 71/2011, which grants the company an area comprising 182.886 ha in Manica Province to develop forestry. Also in 2011, it acquired about 173.000 ha of land for the production of eucalyptus in Zambézia Province. Joining the two concessions, Portucel controls an area of about 380 000 ha of land in Mozambique, the largest in the country. This company has a loan from the International Finance Corporation, the corporate finance arm of the World Bank, which in October 2013 granted the company a loan of US$ 2.3 million to plant eucalyptus, an amount that is expected to increase with the phased operationalisation of the investment.

An unpublished study by ADECRU estimates that the cumulative impacts of Portucel’s forest plantations may affect more than 50,000 families, including usurpation of water and the disappearance of villages and communities in Zambézia and Manica.

At the conference, the farmers declared that they are not against the development of the country, however, they question the country’s development policies, the reality being that these end up evicting farmers from their land to make way for foreign investments that do not help farmers but generate increasing conflicts over land.

In an act of desperation and distress, Alifa Aide, Vice-President of the Provincial Peasants Union for Niassa stated, "Many farmers are being driven off their land to accommodate foreigners, what is even worse is that the government does not defend us. We are threatened by district and provincial government authorities and at the national level no one hears us. If the government feels that we the farmers have no right to live on this land, then it must tell us to go to Tanzania or Malawi to ask our brothers for land and live there, seeing that this country does not belong to us."