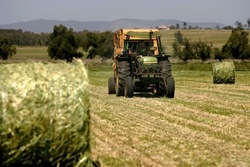 Institutional investors are poised to make grabs for large farmland assets in ­Australia, according to local and ­offshore fund managers.

Perpetual fund manager Andrew ­Cannane, who specialises in cross-border property and infrastructure investments, said private equity firm TPG's acquisition of the Inghams' poultry assets was an example of the type of large-scale ­opportunities investors were seeking out.

"TPG bought Inghams for $880 million. Once the sale is complete, they may have $600 million in their coffers and 20 year leases – that's opportunistic," he said at the recent Global Property Investment Forum in Melbourne, hosted by Atchison Consultants.

"We expect there will be institutional investments into cattle farmland and grain properties. Investors are ­looking for large investments priced $200 million and above. They want these assets for the diversification benefits and because of things like food security," Mr Cannane said.

Justin Epstein, founder of fund manager the One Investment Group, said there was strong demand from offshore investors and wealthy investors for rural assets. "We're fielding enquiries for around $1.5 billion worth of agriculture property," Mr Epstein said.

The One Investment Group manages about $1.5 billion of real estate assets (as part of a $4 billion portfolio) on behalf of investors. Most invest through managed investment trusts or significant investor visa funds.

The fund manager has about $150 million of agricultural property under management, including the ­8900-hectare Linkletters estate in ­Esperance through the listed ­Agricultural Land Trust.

Mr Epstein said he expected increasing activity over the next five years from Asian developers, pension funds and sovereign wealth funds looking to secure real estate assets in agriculture, as well as residential and industrial developments.

The drivers, he said, were food security and the counter-cyclical investment opportunity provided from rural property.

Jack Foster, managing director at Franklin Real Asset Advisors based in New York, told the Melbourne investor conference that prices of rural property in the US had "really skyrocketed" in the past 20 to 25 years. He added that there was increasing appetite not just for farm land but for farming infrastructure, ­particularly water.

"Farming is not just about land, its about execution and delivery. When we talk about infrastructure, there are a lot of areas here where there will be demand going forward," Mr Foster said.

The Savills global farmland index, which tracks changes in farm prices across 15 countries including the US, UK, Australia, Europe, Africa and South America, reported a "continued upward trend in average farmland values around the globe", in its April 2014 report.

It found farm values had increased by 20 per cent per annum on average between 2002 and 2012 – about 15 per cent in Australia – with positive growth forecast in the short to medium term.

In Australia, overseas investors have demonstrated an appetite for very large assets in the growth sectors like almonds and poultry.

In September last year, the ­Queensland-based Laguna Bay Pastoral Company, backed by Swiss, Danish and US funds, acquired 12,000 hectares of planted almond groves in Victoria in a $200 million sale and lease-back ­agreement with Olam International.

Another overseas investor, US property group WP Carey, is in due diligence to buy about $150 million worth of the ­Inghams poultry farms in a process being handled by CBRE.

"There are some terrific investment opportunities in agriculture at the moment, with prices back to levels that allow for a margin of safety in achieving targeted cash returns," said Laguna Bay CEO Tim McGavin, following the deal with Olam.