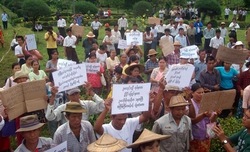 BANGKOK — Millions of small-scale farmers in Burma risk losing land under proposals to regulate land use which focus too much on investment and not enough on people’s livelihoods, a Netherlands-based non-profit think tank warned on Thursday.

The government this month unveiled its draft of a land use policy which will help form the basis of a national land law.

Land ownership and use have emerged as key issues during Myanmar’s political and economic transition, with deep resentment and protests over land acquisitions, often dubbed “land grabs”, for infrastructure, development or large-scale agricultural projects.

The draft policy, due to be completed by December and handed to parliament, was criticized in a report by Transnational Institute (TNI), an international think thank, for focusing on investment rather than on distribution or democratic control.

Jennifer Franco, co-coordinator of TNI’s Agrarian Justice team, raised concerns over the purpose of the policy.

“The policy seems to be more explicitly oriented towards investors and less oriented to small-scale food producers, farmers, fishermen and poor, vulnerable and marginalized people,” Franco told the Thomson Reuters Foundation by phone from Burma after the release of the TNI report.

“There’s been a resurgence of protests and conflicts around land acquisitions. It’s a kind of social volcano.”

She said the policy seemed to be driven by economic reasons and to attract foreign investment, shutting out discussions on food security, environmental sustainability and democratization that would be a part of land policy in other countries.

All land in Burma is owned by the government but farmers are given land use or tillage rights, making land use a particularly sensitive issue for small-scale farmers who make up the majority of the nation’s population of 53 million.

Up to 70 percent of Burma’s labor force is estimated to be directly or indirectly engaged in agriculture. The sector accounts for 44 percent of the GDP, according to consulting firm McKinsey & Co.

The Thomson Reuters Foundation was unable to contact relevant authorities from the Ministry of Environmental Conservation and Forestry for comment despite repeated attempts.

TNI said the draft policy would “create a legal environment that is greatly beneficial for a small group of large national and international companies, but which has the potential to be hugely disadvantageous for millions small-scale farmers”.

It also criticized the short time frame of three weeks set aside for public consultations on the 90 page draft policy when about 17 public workshops will be held across the country.

“It’s a lot to read, study, think about and discuss. And many of the terms can be very technical, specialized and ambiguous,” Franco said.

“I’m not sure whether in all parts of the country the political conditions good enough to let people freely and meaningfully participate in the consultation.”