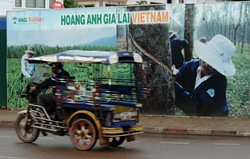 A vehicle drives past an advertisement in Vientiane for a Vietnamese company with a rubber concession in Laos (Photo: AFP).
RFA | 30 October 2014

Laos is to allow foreign investors to purchase land under a proposed law which some groups say would discriminate against locals and threaten national sovereignty.

The Ministry of Natural Resources and Environment is drafting an amendment to a land law allowing foreigners to purchase land for investments of at least U.S. $500,000 in the country, a high-ranking ministry official told RFA’s Lao Service.

The official said the move is aimed at attracting foreign investments to fuel the impoverished economy.

“In the draft we have added [a clause about] foreign investors [purchasing land] to promote investment, but the next step is to bring the draft for discussion at the government meeting for approval and consider adding additional recommendations,” said the official, who spoke on condition of anonymity.

A committee under the ministry in charge of national land policy “agrees that we should include the right to purchase land for foreigners,” he said. “We are doing this in the highest interest of the public.”

Currently, foreign investors in Laos—the majority of whom are from China or Vietnam—are either granted land leases or concessions from the government for up to 99 years, but existing law includes no provisions to purchase land, which is all state-owned in the communist nation.

It was unclear whether the proposed amendment includes limitations on the amount of land that foreign investors can purchase or guidelines for the cost of the property.

According to the ministry official, the draft amendment will likely be submitted for review at a government meeting of various ministries by the end of November.  If the draft is approved, it must be endorsed by the National Assembly, or parliament, before it can be signed into law.

Allowing foreigners to purchase land would further entice them to invest in Laos, the official said, adding that the business they bring to the country would help to benefit the local economy.

Laos faces persistent fiscal difficulties that have forced the government to delay public infrastructure projects and cancel a cost-of-living allowance for the civil service.

The coordinator of a communal land rights network told RFA that he was against the proposal to allow foreign investors to purchase land, saying the government should instead focus on stronger legislation to ensure that leases and concessions to foreigners do not encroach on the land of villagers.

“I don’t agree with allowing foreigners to buy land, but I do not have any objections to leases and concessions as long as they don’t affect villagers’ property,” he said, adding that selling off land to foreign interests would “turn parts of Laos into other countries.”

The coordinator, who asked not to provide his name, said that his organization works to lessen the influence of capitalism in Laos in the interest of “national liberalization and land ownership,” suggesting that the government is sacrificing sovereignty and the rights of villagers to generate income from foreign investments.

His concerns were echoed by one resident of the capital Vientiane, who told RFA that the proposed change was akin to “putting Lao territory up for sale.”

The sources also questioned why the government would grant foreign investors the right to purchase land when it does not provide the same privileges to its own citizens.

Laotians are granted the right to occupy land through the state. Some of them can sell the right to use their land if their family has inhabited it for generations.

However, citizens cannot officially own property, and the government reserves the right to reclaim land when this is deemed to be in the public interest, such as for national development projects.

So far, more than 2,600 land lease and concession agreements have been signed with investors covering 1.1 million hectares (2.7 million acres), or roughly five percent of the country, according to a report published by the Ministry of Natural Resources and Environment in January last year.

The report said that one out of five villages in Laos is affected by the investments, which exceed the area of the country used for wet rice production.

Most concessions in the country are granted for tree plantations and mining operations, and rights groups say the industries negatively impact local communities which rely on land, forests, and water for their livelihoods and food security. They have also led to forced evictions and compensation disputes.

Due to a growing number of land conflicts, the government of Laos had temporarily suspended the granting of concessions since 2012 after drafting an amendment to the country’s land law a year earlier.

Initially, the government called for recommendations to the draft from civil society organizations, which have proposed that villagers be given the right to participate or oppose land concessions for investment projects in their communities, including an option to receive compensation for loss of their land and farms at market value.

A version of the draft amendment made it to the National Assembly for review in mid-2013, but was rejected by the parliament and returned to the ministry for further changes.