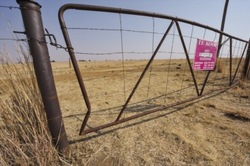 Over 55 million hectares of land in Africa have been “grabbed” since 2000, according to research presented at a conference on Wednesday.

More land had been “grabbed” in Africa between 2000 and 2012 than in the rest of the world combined, Dr Blessing Karumbidza, senior research associate at the Durban University of Technology, told the Africa land Grab conference in Midrand.

He made a presentation on behalf of Prof Robert Home from Anglia Ruskin University in the United Kingdom.

Land grabs were broadly defined as large-scale land acquisitions which displaced vulnerable communities and farmers, with disregard for the rights of these people and social and environmental impacts.

They took place without free prior and informed consent, within the context of poor institutional governance structures.

Large multinational companies, with the consent of the state, and the state itself, were implicated in land grabs.

A contributing factor to land grabs was the legacy of the colonial land ownership system which, following decolonisation, left the question of who owned what land unresolved.

“Even in countries like South Africa, where they have the resources… the knowledge of who owns what specific land is not yet clear,” Karumbidza said.

“The whole governance framework is not yet resolved within South Africa and across the continent. What is the best land system that would suit Africa?” he asked.