Dominion Farms arrived in Kenya's Yala Swamp basin in 2004 with big promises. The company claimed it would turn a defunct state demonstration farm into a modern rice plantation, provide locals with good jobs, and build hospitals and schools. The American owner of the company, Calvin Burgess, presented himself as a 'man of God', on a mission to bring US-style progress to Africa. The locals, sold on this grand vision, decided – with some hesitation and dissent – to allow Dominion to farm on 3,700 ha of their lands.

But a decade later, the communities have harvested nothing but hardship. 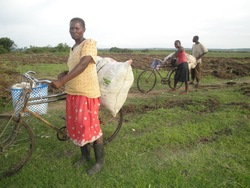 Marais de Yala (Photo : Janak Communications)
"When Burgess came, we did not object to him taking the lands that had already been allocated to the Government years before for the development of an experimental farm," says Erastus Odindo, a local farmer. "But Dominion Farms has put a fence around much more land than that. The company has taken over all of our community lands without our consent and blocked our access to water."

Odindo and other local farmers lost nearly all of the lands that they use for grazing their cattle.

"Burgess mocked our farming methods and said we should abandon our traditional cattle breed because it was backwards," says Odindo. "But now he's put a fence around our grazing lands and is using the lands for his own local cattle. We are losing doubly because he then sells the cattle on the local market and undercuts us."

The agreements that Dominion Farms signed with local authorities were for a large scale rice farm. But the company has also gone into cattle, vegetables, bananas and fish.

"The company produces and sells the same foods we local farmers produce," says Odindo. "First Dominion took our lands and water away from us, and now it is taking our markets. And they are not doing agriculture in a more efficient way than us local farmers. All the machines they have are just for making noise."

Dominion's rice farm now extends right up to the edge of Odindo's village. "When the company sprays pesticides by plane, it comes directly into our homes, poisoning people and contaminating our water supply," he says. "Workers also face regular exposure to pesticides."

The local communities accuse Dominion of polluting their soil, water and air, and of badly damaging the area's biodiversity. They say that it is now difficult to access clean water because of the pollution by pesticides and chemical fertilisers, and that this is damaging the health of mothers and children.

Odindo says that the company's promises of good jobs have also proven to be a mirage. Most workers are employed on a casual basis, with only a few watchmen hired as permanent staff. Their pay is irregular and sometimes late. "The company hasn't been paying wages over the past two months and people have been wondering if it's in financial problems," says Odindo.

But Dominion still seems intent on grabbing more lands. Having already taken control of all the lands collectively managed by the communities,, the company is now aggressively pursuing deals with private land holders. Odindo says that they believe that Dominion is working with Kenyan millionaires to secure land for large agriculture projects, such as a sugar cane plantation that the company is in the initial stages of implementing.

Meanwhile Dominion Farms is also pursuing a new project for a rice plantation in Taraba State, Nigeria, that would be several times the size of its Yala Swamp venture. Odindo hopes that the communities in Nigeria can learn from what his community has gone through and not be duped by Dominion's promises.