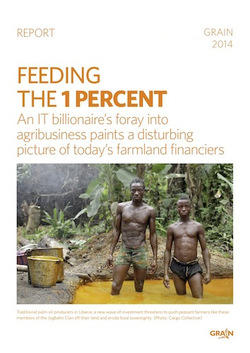 Since the global food crisis of 2008, there has been a massive wave of private sector investment in agriculture. The G8, the World Bank and corporate investors say more money flowing into agriculture means innovation, jobs and more food for a hungry planet.

But examining the investments made by one of the most active private sector players in the global rush to acquire farmland – Indian billionaire Chinnakannan Sivasankaran – a worrying picture emerges.

His Siva Group and its myriad subsidiaries have acquired stakes in around a million hectares of land in the Americas, Africa and Asia, primarily for oil palm plantations.

But Sivasankaran is also a land grabber and tax avoider. Like the majority of transnational investors in agriculture, his investments are channeled through a web of shell companies based in offshore tax havens. The companies he holds shares in are engaged in dubious land deals and kick back schemes, and seem far better at funnelling generous payments into the pockets of their directors than with producing food.

Perhaps the most alarming side effect of this type of investment is the commodification of land and the marginalisation of communities that rely on it. Wherever the Siva Group and its like go, they secure title to vast parcels of land by any means necessary – often without the informed consent of the affected communities. They then leverage these landholdings for cash and credit to turn still more deals.

Far from increasing food production, this new wave of investment actually threatens to push peasant farmers off the land and erode food sovereignty.