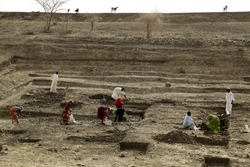 Street protests could erupt at any time in El Obeid town in North Kordofan due to a dispute over agricultural land between local farmers and the state governor, an activist said.

Ali Adam, an activist living in El Obeid, told Radio Tamazuj that farmers are grumbling about what they called “takeover of their land” by the state government of Ahmed Haroun.

The governor is being accused of selling land to investors, according to Ali.

“You know, local citizens are furious, so protests could erupt at any time against the governor’s policy,” Ali said.

He said local traders also complain of heavy taxes by the authorities.

To contact Radio Tamazuj with press releases, comments or information, write to [email protected] with full name and contact information.