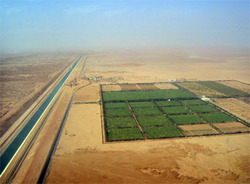 Egyptian PM Ibrahim Mahlab met with UAE Minister of State Ahmed Al Jaber and officials of Al Dahra Agriculture on September 30, 2014 to assure them that the Egyptian government is removing obstacles to the company's projects in Toshka.
Amwal Alghad | 1 October 2014

Mahlab asserted that Egypt is responsible for solving all the dilemmas which facing investors and improving the country's investment climate in general.

Mahlab has contacted some ministers to remove the obstacles which faced by UAE-based Al Dahra in its different projects.