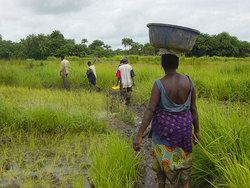 Food Security
9. Let me now come to the very pertinent issue of food security. As you are aware, Government is very much concerned with this problem and the Deputy Prime Minister and Minister of Finance has made a provision of Rs 1 billion in the budget under the new item ‘Food Security Fund’. Necessary measures will be taken for the creation of the Food Security Fund and the Regional Food Company in the Finance Bill. Regulations are also being made by the Deputy Prime Minister and Minister of Finance under the Finance and Audit Act for the setting up of a committee to manage and administer the Food Security Fund. The private sector will be represented on this Committee given the important and critical role it will be called upon to play to increase food crop production in the country.
10. Government will tackle the food security issue on two fronts, at domestic and regional levels. At the domestic level, 20 agricultural development poles will be created to provide necessary space and opportunity for potential entrepreneurs as well as existing farmers. I am glad to note that the private corporate sector has agreed to release additional land for potato cultivation. I would like to appeal to them to arrange for the early release of land for the setting up of the development poles. Rose Belle Sugar Estate has already agreed to release 100 arpents of land for this purpose. SIT has undertaken to contribute to the project.
11. On the regional front, a lot of ground work has been achieved in regard to cross border initiatives in Mozambique and Madagascar. An agreement for the allocation of 5,000 hectares of land in the Beira region was signed by me with the Mozambique authorities early this year. Madagascar and Mauritius have signed a number of MoUs to facilitate trade of agricultural products between our two countries. Madagascar has submitted a very ambitious project proposal to the Indian Ocean Commission for its transformation into a regional granary. The Deputy Prime Minister and Minister of Finance will lead a joint Government and private sector delegation to Madagascar shortly to finalise the deal which will enable Mauritian stakeholders, corporate sector and small planters alike, to invest in food production projects in Madagascar.
12. Ladies & Gentlemen, I would like to mention that at the recent ACP/EU Ministerial Meeting in Addis Ababa, the issue of food security figured high on the agenda. The EU expressed readiness to increase financial contribution for short term measures to meet higher costs of safety nets and relief programmes. Mr Louis Michel, EU Commissioner for Development, indicated that the Commission has mobilised from the EU budget, a total of €500 million to finance immediate/short term needs of ACP countries. He has promised that he would be a strong advocate of the cause of the ACP as far as food security is concerned.
13. My Ministry, in collaboration with relevant stakeholders including the Chamber of Agriculture, has been working on the elaboration of a Strategic Options Document to give a new orientation and a new impetus to the food crop and livestock sector. An Action Plan setting clear objectives and targets for the short and medium terms has been approved by Government. This Action Plan will be submitted to the EU for funding for its implementation.
14. You would all recall that the Deputy Prime Minister and Minister of Finance met Mr Robert Zoellick, President of the World Bank in March this year and raised the issue of food security with him. On 2 April last, the President of the World Bank announced the New Deal for a Global Food Policy which has been endorsed by 150 countries. A Global Food Crisis Response Facility to fast track US $ 1.2 billion has been created to address immediate needs arising from the food crisis. The Facility will provide rapid response financing for investment and budget support programmes in IDA and IBRD countries.
15. My Ministry and Ministry of Finance will seek funding under this facility to promote the cross border initiatives. Likewise, assistance from the COMESA under the Comprehensive Africa Agriculture Development Programme will be sought to finance infrastructural projects in the region.