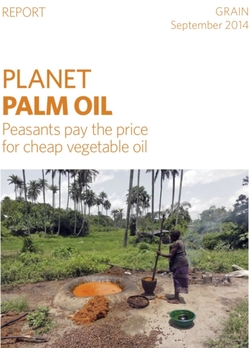 Cultivation of oil palm is expanding rapidly around the world. These new monoculture plantations mean the destruction of rainforests, labour exploitation and brutal land grabbing.

Oil palms can only be cultivated profitably in an equatorial belt occupied by by peasants and indigenous peoples and the tropical forests they depend on. Thus the story of the expansion of oil palm plantations across Asia, Latin America and now Africa is also a story about the often violent displacement of these peoples and the destruction of their forests and farms.

Over the past fifteen years, foreign companies have signed over 60 deals covering nearly 4 million hectares in central and western Africa for the development of oil palm plantations.

Previous attempts at industrial cultivation of oil palm in Africa have largely failed and production has remained in the hands of small-scale producers, the majority of them women. The renewed interest in Africa is a reminder that the aggressive expansion of oil palm is not simply about land. It is about a larger struggle over food systems and models of development.

Will African palm oil be produced by African peasants or multinational corporations? Will palms be grown on mixed farms and semi-wild palm groves – or will peasants be driven out to make way for large scale, industrial plantations?