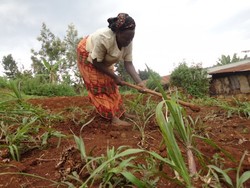 NAIROBI, Sep 10 2014 (IPS) - When Kiprui Kibet pictures his future as a maize farmer in the fertile Uasin Gishu county in Kenya’s Rift Valley region, all he sees is the ever-decreasing plot of land that he has to farm on.

“I used to farm on 40 hectares but now I only have 0.8 hectares. My father had 10 sons and we all wanted to own a piece of the farmland. Subdivision … ate into the actual farmland,” Kibet tells IPS. “From 3,200 bags a harvest, now I only produce 20 bags, at times even less.”

Statistics by the Food and Agricultural Organisation of the United Nations (FAO) show that a majority of Africa’s farmers now farm on less than one hectare of land.

According to FAO, in the last 10 years the land/person in agriculture ratio in Kenya declined from 0.264 to the current 0.219. Explained as a percentage, this means that the number of people with one hectare of agricultural land in Kenya decreased by 17 percent over the last decade.

Within the same period, the number of people with one hectare of agricultural land declined by 13 percent in Zambia and by 16 percent in Uganda.

Allan Moshi, a land policy expert on sub-Saharan Africa based in Zambia, tells IPS that while investors are rushing to East and southern Africa and making large-scale planned land acquisitions, “large-scale land acquisition not only reduces available land for locals, but what is available to the locals still has to be subdivided [because of] land inheritance.”

He explains that land subdivision has been driven by growth in population, land inheritance “as well as a shift from customary land tenures to land owned by individuals based on the belief that individuals can exploit the productive potential of land more effectively.”

According to a 2012 USAID report titled “Emerging Land Issues in Africa”, 25 percent of young adults who grew up in rural areas did not inherit land because there was no land to inherit.

“[People] just want to have a title deed even if it means subdividing the land to economically non-viable portions, while big investors are interested in high-value crops, particularly in horticulture, limiting available land for food crops,” Moshi says.

Smallholder farmers across Africa account for at least 75 percent of agricultural outputs, according to FAO.

“They [smallholder farmers in Botswana] have less than eight percent percent of the agricultural land and they still account for nearly 100 percent of the country’s maize production,” he says.

In the southern African nation of Zambia, 41.9 percent of farms comprise of less than one hectare of land, with at least 75 percent of small-scale farmers farming on less than two hectares.

Anthony Mokaya, of local NGO Kenya Lands Alliance, tells IPS that many countries on the continent are yet to establish laws that govern subdivision of agricultural land.

And while South Africa and Kenya have legislation on the subdivision of land, Mokaya says “the laws remain largely ineffective.”

While the Agriculture Act (Chapter 318) in Kenya categorically states that agricultural land should not be subdivided below 0.8 hectares, smallholder farmer Kibet says that “many farmers do not know that the law exists.”

“We subdivide not based on what the law says, but based on the number of dependents who want a share of available land, particularly where land inheritance is concerned,” Kibet explains.

South Africa’s Agricultural Land Act prevents the “subdivision of agricultural land to the extent where the new portions created are so small that farming will no longer be economically viable.”

South African land owners are prohibited by the act from subdividing agricultural land without consent from the Ministry of Agriculture, Forestry and Fisheries.

But as is the case with many African countries, Moshi says that subdivision of agricultural land has not been guided by the law.

“The problem is not the act itself, but the implementation of it. Many land owners are not aware that there is a law that prohibits subdivision of agricultural land below a certain threshold.”

“Smaller farmlands will require very intensive production technologies, such as the hydroponic production where plants are grown in a mineral solution rather than in the soil,” he says, adding that some flower farms in Naivasha, Rift Valley were already using this technology “but it requires a lot of water.”

Titus Rotich, an agricultural extension officer in Kenya’s Rift Valley region, says “farmlands are becoming so small that with time, farming will no longer be economically viable.”

“Most families who, 10 to 20 years ago, had over 40 hectares now have to contend with less than a hectare. Meaning that the land is only used to set up a homestead, and to grow a few backyard vegetables and rear a few chickens,” Rotich tells IPS, explaining that previously a farmer could produce 28 to 38 90-kilogram maize bags on just 0.4 hectares of land.

“One such bag is sold at a significant amount of 35 to 50 dollars depending on the region. But many farmers are now lucky if they produce 20 bags because they have their homestead, their cows, chickens and so on the 0.4 hectares [and it is not solely used for farming],” he says.