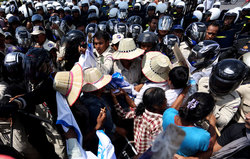 Dozens of district security guards backed by military police surround protesting farmers from Kratie province in August 2014 at Phnom Penh’s Wat Botum park. The farmers were protesting against a land concession given to the South Korean agribusiness company Horizon Agriculture Devlopment. Two weeks later, Cambodia's Land Management Minister announced that the lands would be taken back from the company and awarded to local residents. (Photo: Siv Channa/The Cambodia Daily)

By Aun Pheap and George Wright

Land Management Minister Im Chhun Lim intervened in a high-profile land dispute between villagers from Kratie province’s Snuol district and a South Korean agribusiness firm over the weekend, announcing Saturday that the contested 1,562-hectare tract would be taken back from the company and awarded to local residents.

Speaking to representatives of the villagers at Phnom Penh’s Samakki Raingsey pagoda, where they have been camped out for weeks, Mr. Chhun Lim told the group to return to Kratie in order to receive their land titles.

“Please, families who are involved with this plot of land, go and get land titles at the provincial office on Wednesday morning,” he said.

Deputy Kratie Governor Khan Chamnan, who accompanied Mr. Chhun Lim to the pagoda, said the disputed land had been taken back from Horizon Agriculture Development (HAD), which was granted an economic land concession in 2008 for a cassava and pepper plantation, as the company had not sufficiently developed the area.

“The government has confiscated the land from the company because they did not respect the contract,” Mr. Chamnan said by telephone Sunday. “The company received an economic land concession, but they did not use the land for development.”

The dispute has drawn the attention of both Prime Minister Hun Sen and the South Korean Embassy, which filed an official complaint with the Ministry of Land Management, defending the firm, in March, leading to a meeting between South Korean Ambassador Kim Han-soo and Mr. Chhun Lim.

Mr. Hun Sen last month used the conflict in Kratie as an example of the failure of the Land Management Ministry and local authorities to resolve land disputes, prompting desperate villagers to flock to Phnom Penh to find a solution.

In a speech on August 18, the prime minister told authorities to settle land disputes in their constituencies or step down from their positions.

“I will now follow you and catch your mistakes,” he said at the time. “But if you say, ‘I can’t fulfill this duty because it’s a big burden,’ you can resign.”

But Mr. Hun Sen’s own land-titling scheme, launched in 2012, has also come under scrutiny due to the dispute, when it emerged that the prime minister’s student volunteers had measured land that belonged to Horizon Agriculture and promised it to villagers.

Chhay Ro, one of the claimants to the land in Snuol district who has been protesting in Phnom Penh, said he was relieved by the government’s decision to cancel its contract with the South Korean company and give the disputed land to the villagers.

“I have 6 hectares and I hope the government will give me all of this, because Mr. Chhun Lim told villagers at the pagoda that we will be given what we had originally,” Mr. Ro said.

Lim Jo-heon, director of HAD, said he had not been officially informed of the decision to take back his firm’s land concession.

“However, if the decision is true, we the company cannot accept any decision that makes us lose our developed area,” he said via email.

Mr. Lim said the company explained in a meeting with the cadastral commission on August 26 that it had already cleared much of its 3,734-hectare concession and started planting rubber trees.

“The development area was a non-disputed area,” Mr. Lim said. “Further steps will be taken after the management’s meeting.”

“In my personal opinion, I was expecting that kind of reaction from the Ministry of Land Management because Prime Minister Hun Sen was backing the villagers during his speeches,” Ms. Park said.

“Of course, I think it’s unfair because according to the contract between the HAD and the Ministry of Agriculture back in 2008, it was totally the company’s right to claim that territory and they cleared that land, spending millions of dollars,” she said.

Ms. Park said the embassy had little hope of reversing the decision, but believed Horizon Agriculture would be compensated for its loss.

“For now, I don’t believe we can do anything, but I believe the Ministry of Land Management will do something for HAD, for example provide another [economic land concession] for them, but we will have to see,” she said.

Kao Malilen, director of the Kratie provincial land management department, however, said the ministry’s decision reflected the reality that villagers were farming the land long before HAD arrived.

“I understand that the government returned this land to the villagers, and this is right, because the company came to occupy the land in 2008, but people established this village before that, a long time ago,” he said.