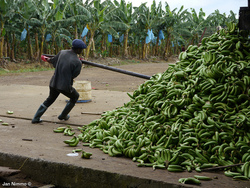 A new 800 ha banana plantation is planned in Dehaene in the South region by a subsidiary of France's Compagnie Fruitière.
blackseagrain.net | 4 September 2014

A new banana plantations with a total area of 800 hectares is planned in Dehaene in the South region.

PHP (the company Plantations of High Penja), controlled by the Fruit Company (France) company plans to create a new banana plantation near the town of Dehaene (southern Cameroon). The total project will extend over 800 hectares and will be done in several phases. The first step will count fifty hectares.

The current PHP company was formed by the merger of SBM (Society of Banana plantations of Mbome) with SPNP (Société des Plantations Nouvelles de Penja) and PHP (High Penja Plantations). The PHP Company is a banana leader in Cameroon, with an estimated production of 120,000 tonnes/year by Assobacam (banana Association in Cameroon).

Its banana exports reach 55,518 tonnes in the first half of 2014 while total exports totalled 133,000 tonnes of bananas over the same period.