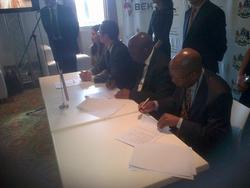 South Africa's Minister for Economic Development and Tourism Mike Mabuyakhulu, PengXin International's general manager Kenneth Wang and BEK Holdings chief executive Elias Khumalo signing a memorandum of understanding on the sidelines of the 2013 BRICs meeting in Durban that involves a R2 billion project by BEK-Pengxin Agritech to produce food and high-end by-products from agricultural estates in each of South Africa’s provinces covering 1 million hectares of land.
All About Feed | 3 September 2014

China's developmental aid to Africa is impressive. Apart from construction, private companies  heavily invest in agriculture, increasing the African market and trade opportunties with the rest of the world. But will Africa profit from these investments, and what are the downsides of the Chinese  engagement?

China and Africa have enjoyed a long-standing (somewhat complex) friendship, which goes back to the Cold War, in which the two economies were political allies. Africa also helped China re-enter the United Nations and facilitated China's sourcing of raw materials needed during its economic and political reformation, which began in the late 1970s. Its investment in Africa started in the 1980s, gradually expanded in the 1990s and has rapidly increased since the beginning of this century. China's development aid is based on equality, mutual development, common development and 'no strings attached', says a 2011 statement from the Chinese State Bureau for Information.  Although the Chinese believe that you first have to be friends before you can do business, it cannot be ignored that China enters, sees and builds in Africa at a rapid pace.

Enormous land space
Agriculture is one of the sectors of great interest to China, as this sector is very important for Africa and a true driver for economic growth as many African countries are viewed as fast-growing markets. The central part of the continent (Sub-Sahara) is often said to have great potential because of its green and wet parts and the enormous land space available. Obviously the Northern part, which is mostly desert, has less potential for agriculture. And the figures are impressive. According to data from the Economic Commission for Africa and the World Bank, the growth forecast for African agriculture is US$45 billion by 2020, up from $10 billion in 2010. They also say that 24% of the world's land with rain fed crop production potential lies in Sub-Saharan Africa. At the same time, African governments and donors have scaled back expenditures on agriculture in the last three decades, with African governments reducing their budget allocations for agriculture from 7.3% in the 1980s to 3.8% in 2000, according to the International Centre for Trade and Sustainable Development. So, financial support from outside Africa to invest in agricultural projects would be more than welcome you would reckon. India, South Korea, Brazil and China are the main countries to invest in Africa, with China as the undisputed winner.  Chinese investment in African countries has increased some thirty fold in the past ten years. There are an estimated 800 Chinese corporations doing business in Africa, most of which are private companies investing in the infrastructure, energy, banking sectors and agriculture. But also large to medium-sized state-owned Chinese farming groups are the ones to invest. Investments mostly cover the development of agricultural research stations, farms, fisheries, people (technical assistance and expertise) and research projects.

Current opportunities
The growing interest in agricultural development was also reflected in a dedicated session about this topic at the Alltech annual symposium, held last May in Lexington, Kentucky. Experts discussed the current status and the possibilities of this continent and shared this with the broad international audience. Session chair, Aiden Connolly, vice president at Alltech sees great potential. "African agriculture is the true driver for growth and food production in Africa and is projected to grow with 60% by 2020." Professor Fu Wenge from the Chinese Ministry of Agriculture explained: "China is a global investor and in the last two years, has invested over US$100 billion in Africa. China's approach is to look for partnerships and not only profit from this continent. It has to be a win-win situation."  Wenge also explained why China is interested in Africa. "We have a history together, from a political and economic standpoint. In addition, China has gone through the same situation, that is: building new economies and stepping up the incomes, productivity etc. We used to be even poorer than Africa. With our experience we feel that we can make a difference in Africa," he said. Currently, China invests particularly in manufacturing, mining and infrastructure.  About 70% of the total Chinese investments in Africa go to roads and railways. In comparison: the USA invests 70% of its Africa budget in healthcare. Fu said that European countries lag behind in their investments, probably because they think the risks are still too high.

Raise cattle where the water is
Next to Professor Wenge, a number of speakers working in or affiliated with Africa aired their thoughts on the current and future situation of African agriculture and livestock production. Evans Darko from AgForte (poultry company) said that Africa should better exploit the sunshine and rainfall. "We can be champions in producing corn." Julie Borlaug from the Norman E Borlaug institute and Texas A&M University said how Africa could indeed be the next bread basket, as it has 60% of the world's arable land. But help from private companies to invest is necessary. "And you don't have to be an agricultural company to invest in the agricultural sector. We have a great example were there has been investments in bikes, which changed the way coffee farmers could do their job and hence increased the production and quality of the coffee beans." Charles Moore, consultant in South Africa sees great potential for cattle production. "What Africa needs is investments in export quality schemes and a disease free management system in foot-and-mouth disease (FMD) free zones. The risk of wildlife transferring diseases is high, in Africa. But if we can get certain things under control, we can increase production," Moore said. According to Moore, potential for raising cattle lies in Zambia (water and grains availability), Ethiopia (enough water and cooler climate), Zimbabwe (infrastructure and water availability) and Angola (favourite cattle areas and water availability). In other words: cattle can be raised in Africa in areas with sufficient water availability. In South Africa, the dairy industry is already quite a well-established one and this country produces 50% of Africa's milk. Kenya also has a big dairy market, but the scale and size of the farms can still be increased. China is also eyeing the African dairy market. It still relies a lot on New Zealand dairy, but for how long? However, a Chinese company wanting to invest in dairy production in KwaZulu-Natal (to export the milk again to its own country) has recently come under fire from milk processors who fear the increase in demand could push up prices and lead to local milk shortages, as reported by the South African publication Farmers Weekly.

Invest in local human capital
There is no doubt about it; China has become Africa's largest trade partner. In 2009 it over took the US as the largest trade partner of Africa.  The Chinese engagement has profited the continent in many ways but the number of investments in a relatively short period of time has also raised some eyebrows. Critics don't believe that China's development aid is solely based on equality, mutual development, common development and 'no strings attached'. They accuse China of exploiting the continent's vast mineral and energy resources, at the expense of local people, to ensure raw material supplies for growing energy needs within China. Benin and the Sahel countries of Burkina Faso and Mali supply up to 20% of China's cotton needs. While Côte d'Ivoire supplies China with cocoa, large shipments of coffee are imported from Kenya (Source: International Trade Centre). As for fish products, Namibia  remains one of the main providers for China (Source: Financial Times). "Africa has a lot of raw materials and potential, but we need to work with the local human capital to turn these raw materials into valuable food products. But this requires education and that needs to be better developed," as explained at the Alltech symposium by Nick Smit, vice-president, Alltech Africa. He believes that Africa can certainly be the 'next Brazil' when it comes to poultry production for example. "But then the cheap chicken dumping policies have to stop. Let the poultry meat be produced on the continent, by local people," Smit explained.  Some experts say that the Chinese engagement in African agriculture is still in the exploratory stage. Chinese labour is often brought to Africa – along with the investments. This has to and will change in the future, so that Africa can further build on productivity enhancements, better living standards and a sustainable growth for the agriculture and livestock industries. Only then this 'forgotten continent' can also jump on the bandwagon called 'The Green Revolution'. And this in turn might also spur the interest of more Western countries to invest. Because - despite the criticism - China still brings more money to Africa than Western countries.