Observatory for the Protection of Human Rights Defenders | 18 August 2014 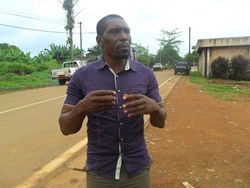 The Observatory for the Protection of Human Rights Defenders, a joint programme of the International Federation for Human Rights (FIDH) and the World Organisation Against Torture (OMCT), has received new information and requests your urgent intervention in the following situation in Cameroon.

The Observatory has been informed by reliable sources about the continued judicial harassment against Mr. Nasako Besingi, Director of the NGO Struggle to Economize Future Environment (SEFE), a local environmental organisation based in Mundemba, Ndian division, Southwest Cameroon.

According to the information received, on September 23, 2014, Mr. Nasako Besingi will appear before the Mundemba Court on charges of “publication of false news via the Internet”, following a complaint filed by the New York based company Herakles Farms. He faces a maximum penalty of six months of imprisonment and a fine of 2,980 euros. Mr. Besingi's trial, which began on January 14, 2014 in Mundemba court, has already been postponed 10 times. It resumed on June 24, 2014, and is still ongoing. On January 28, 2014, he was granted a recognisance bail of 4,576 euros.

This complaint was initiated in the context of SEFE’s representation of the indigenous population in the public litigation that has been brought to court since August 2011 against the SG Sustainable Oils Cameroon (SGSOC) – a local subsidiary of Herakles Farms – project to build a large-scale palm oil plantation which would lead to massive deforestation and threaten the livelihoods of residents in an area home to vital biodiversity. In particular, it followed the publication by Mr. Nasako in Meangwe of an email in August 2012, in which he recalled how he was physically attacked by a group of men identified as junior managers of Herakles Farms (see background information).

Moreover, on October 29, 2012, Mr. Besingi lodged a complaint at the Senior State counsel of the legal department[1], following this physical attack. Following months of silence, on January 2014, the State counsel notified him that the complaint had “disappeared from registers”.

The observatory further recalls that Mr. Besingi is also prosecuted in another trial, along with five of his colleagues, Ms. Ekpoh Theresia Malingo, Mr. Isele Gabriel Ngoe, Mr. Mosongo Lawrence Namaso, Mr. Ochoe Charles Tatana and Mr. Nwete Jongele, for organising “an undeclared public meeting” while distributing anti-Herakles T-shirts to locals (see background information). A court hearing scheduled for June 19, 2014 was also adjourned several times. The trial was postponed on 11 occasions and is still ongoing. The next hearing should take place on September 11, 2014.

The Observatory strongly condemns the ongoing judicial harassment of Mr. Nasako Besingi, as it seems to merely aim at sanctioning his and SEFE's peaceful human rights activities, and calls upon the authorities of Cameroon to put an end to all acts of harassment against him as well as against all human rights defenders in Cameroon.

On August 29, 2012, Mr. Besingi was attacked by a group of men that he identified as junior managers of Herakles Farms while he was going to Mengwe village to deliver a public lecture about the impacts of the Herakles project on the local population. Mr. Besingi was pulled off his motorcycle, and beaten while he was on the ground. A group of journalists from France 24 then arrived on the spot and the attackers fled. Due to his aggression, Mr. Besingi suffered ocular and nerves injuries.

Moreover, on November 14, 2012, over 15 heavily armed Gendarme officers raided the premises of SEFE in Mundemba, where over 50 members of the local population had come to get T-shirts that were prepared for a peaceful campaign against SGSOC’s controversial large-scale palm oil plantation[2]. Mr. Nasako Besingi was then arrested without warrant along with Ms. Ekpoh Theresia Malingo, Mr. Isele Gabriel Ngoe, Mr. Mosongo Lawrence Namaso, Mr. Ochoe Charles Tatana and Mr. Nwete Jongele. It was further reported that some local women were forcefully undressed by the gendarmes who removed their campaign T-shirts in public, leaving them partially naked with only their breast wears.

Ms. Ekpoh Theresia Malingo was released during the night, but the rest of the group remained detained incommunicado under very poor conditions and without charges for more than 48 hours.

Please write to the authorities of Cameroon and ask them to:

ii.              Put an end to all acts of harassment - including at the judicial level - against them as well as against all human rights defenders in Cameroon;

iii.            Order a thorough and impartial investigation into Mr. Nasako Besingi's physical  assault, in order to identify all those responsible, bring them before a civil competent and impartial tribunal and apply to them the penal sanctions provided by the law

iv.             Conform in any circumstances with the provisions of the Declaration on Human Rights Defenders, adopted on December 9, 1998 by the United Nations General Assembly, in particular:

-                article 1, which states that “everyone has the right, individually or in association with others, to promote the protection and realization of human rights and fundamental freedoms at the national and international levels”,

-                and article 12.2 which provides that “the State shall take all necessary measures to ensure the protection by the competent authorities of everyone, individually and in association with others, against any violence, threats, retaliation, de facto or de jure adverse discrimination, pressure or any other arbitrary action as a consequence of his or her legitimate exercise of the rights referred to in the present Declaration”;

v.              Ensure in all circumstances respect for human rights and fundamental freedoms in accordance with international human rights instruments ratified by Cameroon.


Please also write to diplomatic representations of Cameroon in your respective countries.