Rise and fall of agricultural holdings in Ukraine, Russia 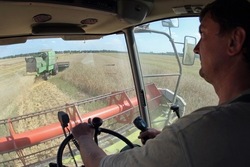 Mriya, the giant Frankfurt-listed wheat and corn grower in western Ukraine, is having its bottom line revamped, after admitting on Aug. 1 that it can’t make $32.6 million worth of interest payments on two eurobonds. The company's technical default is currently being addressed by Blackstone Group and Dragon Capital. (Photo: AFP)

Rise and fall of agricultural holdings in Ukraine, Russia

The default by Mriya Agriholding highlights an important issue for the future of Ukrainain agriculture. Mriya states it has around 300,000 hectares. For comparison the total oilseed rape crop in the United Kingdom was 580,000 hectares in 2009.

The first myth about agriholdings is that they successfully exploit economies of scale.

In agriculture, the economies of scale for large machinery are about 5,000-8,000 hectares. Beyond that size, you need to buy another 500-horsepower tractor and additional machinery. A top manager and agronomist can probably oversee 10,000-20,000 hectares, depending on how spread out the fields are. However, for more 10,000 hectares or so, other costs of supervising staff and overhead increase. More staff equals more theft and more backhanders paid for large orders by salesmen from input distributors.

This is precisely why all over the world the sustainable farm model that has developed over many years has been private family farming or peasant farming. Farms are getting bigger in the U.S. but the average size is 95 hectares and over 66 percent of farms are below 2,000 hectares. The farms in Europe are even smaller.

However, agriholdings have solved a major problem in agriculture and that was access to finance. They have mainly raised funding from initial public offerings or private placement of shares to financial investors. This access to finance has been important as the holdings have been able to sign thousands of hectares of land leases and purchase new equipment and, importantly, invest in grain storage facilities, which have been and remain highly profitable in Ukraine.

Credit rating agencies continue in their incompetence and are rating large agribusiness in a sector they do not understand.

In 2010, when Mriya had more than 150,000 hectares, Fitch Ratings downgraded it, stating that “its reliance on one geographic area in Ukraine and its relative small size...”

Mriya had not made the mistake of most of the early agriholdings who invested in the east and south of Ukraine where the soil is great but does not rain much there. Thus, Fitch suggested that Mriya should get bigger and expand into one of the drier and more risky regions.

Mriya is not the first company to fail but it is the first that had more “sophisticated” advisers that allowed it to raise debt – what were the banks doing when they lent over $1 billion?

The first big failure here was Landkom which was eventually taken ver by Alpcot Agro (from Sweden) for a miserly 2.5 pence per share paid in paper (most of the Landkom investors originally paid 50-60 pence a share and some for over £1!). Alpcot has just asset-stripped.

Of course there are a few exceptions of profitable companies which likely would include “not such large holdings” like Agrimark UK (Continental) and Nibulon and a few other bigger ones like Trigon Agri. All of these are making most of their profit in added value from potatoes, grain exporting or processing.

Mriya cited “its financial condition having deteriorated in recent months as a result…of an increase in price of certain raw materials, a decline in the price of agricultural products and difficulty in obtaining working capital…”

The devaluation in Ukraine actually has helped farmers as most commodity prices are linked to the U.S. dollar or euro and some of the inputs for this year’s harvest were bought pre-devaluation and increases in most input prices have lagged behind the currency depreciation.

However, good growing conditions across the northern hemisphere have reduced commodity prices but for Ukraine to be successful it needs to be internationally competitive and so, withstand lower crop prices.  Policy makers need to understand that the agriholdings are less efficient in agricultural production than private farmers and policy should support the development of small and medium-sized enterprises and not the large agriholdings.

Let’s make a rough estimate of Mriya’s viability. I don’t have accurate figures but their debt has been quoted at over $1.2 billion – as a rule of thumb we use a capital requirement for large farms of around $1,000 per hectare. This is sufficient capital for machinery, grain storage and operating capital. If Mriya has 300,000 hectare then its debt level is $4,000 per hectare which is around four times higher than we would expect and where is the equity that investors have placed there?

Mriya of course has other assets such as a sugar beet processor and much of its harvest income to come. Judging by its historic yield levels, it could get around $600-$700 per hectare. It has probably already spent its rapeseed income so there is little chance of saving the equity.

The question is what happens next – it is likely that another agriholding will try and take over the best bits – maybe Ukrlandfarming financed by its Chinese partners, but the Chinese are smart and will be looking at the figures in detail.

The banks will look at how their debt is secured and should hire an interim management team to ensure the harvest is gathered and how to pay down most of the debt by splitting the holding into much smaller units with machinery and separate companies dealing with grain storage and sugar processing. No doubt Mriya will come up with a restructuring plan but this will have little credibility as it will be prepared by the same advisors that got it into this mess. The banks and shareholders need to demand an immediate list of creditors and assets which will likely show that restructuring is not an option.

Richard Rozwadowski is the team leader of the Danish-funded Value Chains project in Lviv and has been working on agricultural policy and projects for 10 years in Ukraine and 25 years in Central and Eastern Europe.