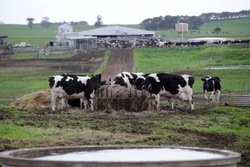 More than half the guest list for the inaugural Australian Dairy Farm Investment Forum in Melbourne next month are ­corporate or Chinese investors seeking to be matched with advisory groups to find dairy land investments.
The Land | 18 August 2014

More than half the guest list for the inaugural Australian Dairy Farm Investment Forum in Melbourne next month are ­corporate or Chinese investors, but with the dismal level of dairy farm funds on offer they may miss out on deploying their capital.

The forum's chairman, Dairy Australia director John McKillop, confirmed the overweight enrolment of such ­investors, who are seeking to be matched with advisory groups to find dairy land investments.

"We have had a lot of brokers call us up asking why there are not enough dairy farm vehicles for them to IPO," Mr ­McKillop said.

However, he said that until now mainstream investors such as Australian super funds had found it too difficult to invest because of their own governance constraints. Without such investors, starting up dairy land companies was almost impossible.

"Dairy has been a difficult play for super funds who have to report their earnings quarterly; but as they seek further investments in the alternative asset class agriculture has to be part of that."

Now, in the sudden realisation of demand for dairy production, especially from China, premiums are being paid for processors Warrnambool Cheese and Butter, Pactum Dairy Group and Harvey Fresh. That has led investors to start demanding positions in new vehicles that own the land underlying such ­production.

Bell Potter Securities' Darren Craike has been raising money for the Australian Dairy Farms Group, which will list on the ASX in October. The fund will own two dairy farms near Warrnambool in south-west Victoria and plans to buy 14 more.Increased demand for land companies

"There has been an increase in demand for agricultural land companies but in the last five to 10 years the options have diminished significantly because of takeovers and M&A," Mr Craike said.

He said many investment-grade agricultural land companies had bought property at the wrong time in the cycle and that there were other challenges in creating land vehicles because of the stigma attached to managed investment schemes.

"Another challenge is properly aligning vendors' interests with shareholders' interests."

However, he is optimistic about the fund's future. "It is clear that institutional investors share our view that there is a significant opportunity to consolidate Australia's fragmented dairy sector."

Other investors are not too sure. Kidder Williams managing director David Williams still has considerable doubts when it comes to agricultural land companies. "It is common for property trusts to trade at a discount to asset backing," Mr Williams said. "So let's see now: how will a rural property trust go with low yields, subject to weather, labour, world commodity prices and all the other difficulties of making money on the land? That is a tough ask."

A number of other dairy farm companies have been quietly building up portfolios. ACE Farming Company, formerly owned by Valad Property Group and run by Jeremy Bayard, expanded its portfolio in northern Victoria again this year.

That company now has 11 farms, including nine in Gippsland, and is ­currently owned by an investor represented by Singapore-based Duxton Asset Management.

Other difficulties in gaining access to farms include strong family ownership and the co-operative model.

Norco chief executive Brett Kelly said anyone can own dairy assets but the crucial thing to get right is management of the farms.

"You have to be very careful when you corporatise farms," he said, "Co-ops are a lot better model. With co-ops you can get volume and good prices, and then all the members can go to their banks and talk about growth and expansion."