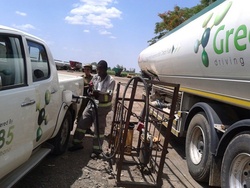 A ZIMBABWEAN company plans to invest about US$500 million in sugar cane cultivation and sugar refining in Luapula Province.

Two other local companies are each looking for over 30,000 hectares of land in the province to set up sugar cane plantations.

Luapula Province permanent secretary Chanda Kasolo said in a telephone interview on Saturday that the Zimbabwean company, Greenfuels, has since acquired 30,000 hectares of land for a sugar cane plantation in Kawambwa’s Luena farm block.

He said the US$500-million investment is expected to create about 5,000 jobs.

Mr Kasolo said, under the programme, the Zimbabweans will build a sugar, ethanol and molasses processing plant.

He said officials from Greenfuels were in Mansa two months ago and will be returning to the province soon to complete the investment deal.

Consolidated Farms Limited, refiners of Kafue Sugar, and Mahtani Group of Companies are also looking for agricultural land in Luapula.

Kafue Sugar has acquired 20,000 hectares of land in an area between Chembe and Milenge districts for the company’s cane plantation while an additional 10,000 hectares will be cultivated by out-grower farmers.

“We have spoken to Chief Kasoma Luela and he is very excited about this project and supports all our efforts to bring development to his chiefdom and Luapula in general,” Mr Kasolo said.

Consolidated Farms is unable to expand its sugar cane production in Mwembeshi in Shibuyunji district because of water problems and, therefore, decided to turn to Luapula.

The firm will also set up a factory that will be producing sugar, ethanol and molasses.

Mr Kasolo said the Mahtani Group is also looking for about 30,000 hectares of land.

The Mahtani Group has partnered with Sunbird Group of the United Kingdom to build a US$150-million bio-ethanol plant in Luapula. The factory will use cassava as its main raw material.