In their latest bid to end a long-running land dispute with KDC International, residents of Kampong Chhnang province’s Lorpeang village yesterday cast a curse on the politically connected development company.

Following clashes between KDC security guards and protesters last week, during which at least one person was beaten unconscious and 14 injured, more than 200 villagers gathered over the weekend for a two-day hexing ceremony. 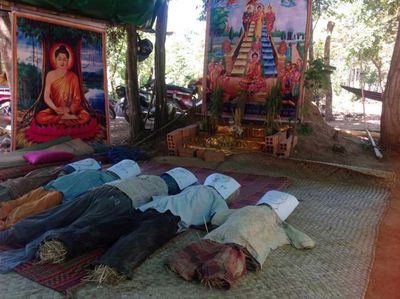 Straw-stuffed effigies lie on the ground in Kampong Chhnang province’s Lorpeang village yesterday during a hexing ritual held by the local community against KDC International.

During the ceremony, residents burned an effigy of KDC director Chea Kheng, the wife of Minister of Industry, Mines and Energy Suy Sem.

Other effigies that were burned included KDC representative Thai Hy; Lam Ley, a court officer who has dealt arrest warrants to the villagers; and authorities who residents say have been complicit in KDC’s land grabbing.

Om Sophy, another community representative, said the residents had been left with no choice but to curse those involved.

“If the company followed the law, they would not [take the land] . . . even the Ministry of Justice issued a letter calling for the company to postpone its activities but it still carries on,” she said.

A letter signed by Minister of Justice Ang Vong Vathana on July 1 called on the company to stop clearing land until a verdict was reached by Kampong Chhnang Provincial Court.

Sam Chankea, a coordinator for rights group Adhoc, said the ritual “reveals that people have lost confidence in the judicial system as well as the . . . government”.

On Thursday, United Nations special rapporteur for human rights Surya Subedi released a statement calling on all sides in the dispute to exercise “calm and restraint”.

KDC representative Hy could not be reached for comment.