Villagers from Kampong Chhnang were met yesterday with brutal violence and arrests as they embarked on an arduous journey to the capital to seek a resolution to their long-running land dispute with politically connected KDC International.

Nearly 100 residents of Ta Ches commune’s Lorpeang village set off in the morning on a 60-kilometre march to Phnom Penh to seek Prime Minister Hun Sen’s intervention in their dispute with KDC, a company owned by the wife of Minister of Mines and Energy Suy Sem. 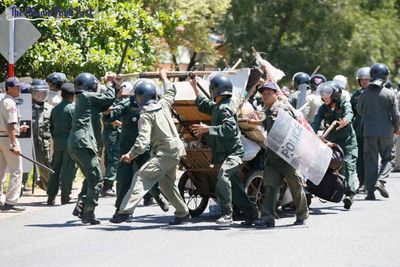 At 11:30am, 5 kilometres into the journey, they were met by more than 100 police and military police, whom a Post reporter witnessed block the road and then rush to attack the marchers – children and elderly among them – with batons.

Three women fainted as authorities tied their hands behind their backs and carried them across the road. One man was left with serious injuries to his left hand. Carts full of rice and cooking pots were destroyed.

The exact whereabouts of villagers arrested in the violence – Srun Tha, elderly resident Kuch Hok and Snuon Nhoeun, the husband of community representative Om Sophy – remained unclear yesterday. The others returned home to call for their release.

“It is damn cruel,” said Sophy, covered in blood and cradling a baby in her arms.

“They do not think of the effect on small children,” she said.

Another villager, Tep Ny, cried out in desperation: “Shoot all of us. We have nothing. If we protest for our land, we are imprisoned,” Ny said. “Why do they mistreat the old? What are we doing wrong?”

Standing on the blood-stained ground, Hul Veasna, Kampong Tralach district police chief, said there had been no attack.

“We just blocked them,” he said, adding that police intervened because villagers were creating a disturbance.

He said he did not know if there were arrest warrants for any of those detained.

After calling for their fellow demonstrators’ release, the community members made their way to a Phnom Penh pagoda, albeit not by marching.

In a statement yesterday, rights group Licadho said “this decade-long land conflict won’t go away by violently beating up the community and arresting a few more villagers”.

Read more about the resistance to KDC.