Chiquita Banana brand receives a counter to its inversion plan 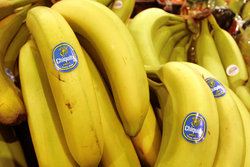 Chiquita Banana Brand Receives a Counter to Its Inversion Plan

Updated, 11:38 a.m. | Chiquita Brands International, the banana producer that is seeking an inversion with a $526 million deal for its Irish rival Fyffes, received an unsolicited offer on Monday from an unlikely pair of private companies.

The Cutrale Group, a wholesale orange juice supplier, and the Safra Group, a private bank, have offered to acquire all of Chiquita shares for $13 a piece, or about $611 million, representing a 29 percent premium to Chiquita’s closing share price on Friday.

The unexpected offer sets up a stark choice for investors: proceed with Chiquita’s inversion-driven growth plan or cash out now. Chiquita’s shares jumped more than 30 percent on Monday, to slightly above the offer price, as investors responded to the bid.

If Cutrale and Safra succeed in acquiring Chiquita, the Fyffes deal would not happen, scuttling one of the year’s inversion deals, in which a United States company reincorporates abroad through a deal, lowering its tax rate and freeing up overseas cash.

That deal, announced in March, would allow Chiquita to gain global sway over the market for the world’s most popular fruit.

Instead, shareholders of Chiquita, whose stock had fallen more than 10 percent since the Fyffes deal was announced, would have an opportunity to sell their shares for a rich premium.

Proposing an aggressive timetable, Cutrale and Safra said they could close the deal by the end of the year, roughly the same time that Chiquita is expected to complete its deal for Fyffes.

Chiquita was caught off guard by the offer on Monday. It was made aware of the offer by a letter sent to Chiquita’s chief executive, Edward F. Lonergan, signed by Michael Rubinoff, a former Bank of America mergers bank who now works for Safra. In a statement, Chiquita said it was reviewing the offer with its advisers at Goldman Sachs and Wells Fargo.

If successful, Cutrale and Safra, both with roots in Brazil, would take control of an internationally recognized brand and split the ownership equally. Details of who would run the company under potential new owners have not been sorted out yet, and Cutrale and Safra hoped to talk to Chiquita’s management about various possibilities.

“The Cutrale Group’s global business operations include oranges, apples, peaches, lemons and soybeans,” Mr. Rubinoff said in the letter. “This platform offers Chiquita extensive experience in all aspects of the fruit and juice value chain.”

The Safra Group is overseen by Joseph Safra, the self-made Brazilian billionaire. It is best known for the Safra National Bank of New York; Banco Safra, a Brazilian bank; and Bank Jacob Safra in Switzerland. The group also owns real estate and farmland.

Mr. Rubinoff said the group had more than $200 billion assets under management and a presence across North and South America, Europe, the Middle East and Asia.

“Throughout these markets, Safra has deep, long-term relationships with major market participants, enabling it to greatly enhance the value of the competitive position of the businesses in which it invests,” Mr. Rubinoff said in the letter.

The offer comes months after Chiquita and Fyffes struck their deal, complicating a merger that was nearing completion.

Cutrale and Safra cited two reasons for making the bid now. First, a United States appeals court recently dismissed civil rights claims brought by thousands of Colombians who said the company shared responsibility for the fates of their relatives who were killed by a paramilitary group that received payments from Chiquita. Second, the company’s shares have dropped since the deal for Fyffes was announced.

The proposed deal would be financed by Cutrale and Safra and is not subject to any additional approvals, the companies said in their letter to Chiquita.

Walking away from the Fyffes deal would be relatively inexpensive for Chiquita, which would have to pay a modest $5 million breakup fee.

Cutrale and Safra have asked Chiquita to respond by noon Friday, Eastern time, and hope to engage in talks. People briefed on the situation, however, said that the group had not ruled out going hostile if Chiquita did not come to the table for discussions.