'Crude stats' show foreigners own only 2% of farmland 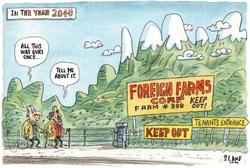 'Crude stats' show foreigners own only 2% of farmland

Prime Minister John Key made an assurance no more than 2 per cent of New Zealand's farmland was foreign-owned as controversy continues over the sale of Lochinver Station near Taupo to Chinese company Shanghai Pengxin.

Labour and New Zealand First say they'll block the sale of the 13,800ha property if they are in a position to do so after next month's election, in response to strong public concerns over foreign ownership of farmland.

Mr Key and his Government have downplayed the scale of the issue and say they would act if there was evidence of a "run" on New Zealand farms by foreigners.

Yesterday, Mr Key said the Overseas Investment Office (OIO) told him in writing they believed "the amount of rural land that's owned by foreigners is 1 to 2 per cent".

Earlier this week, the OIO said it did not know how much farmland was owned by foreigners. Yesterday it confirmed its advice to Mr Key and said it was prepared using "some fairly crude statistics". The figure didn't include forests such as the huge 177,000ha block sold by Carter Holt Harvey to US firm Hancock under the Labour Government in 2006.