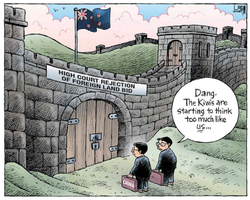 The heated political debate over the proposed sale of the 13,800-hectare Lochinver Station had featured "a considerable amount of misleading information" on investment in land in the two countries, AUT University Professor of Public Policy Ian Shirley said in a statement.

Recent research he had conducted in collaboration with the Chinese in Shanghai illustrated a radically different approach to overseas investment.

"The Chinese do not sell land to overseas interests they lease land and they encourage overseas investment, but only in strategic industries or areas of economic development that they nominate or control," said Shirley.

Suggestions that New Zealand dairy giant Fonterra had been "buying farms" in China assumed that the ownership and leasing of land were the same thing.

The public debate suggested that the decision on the sale of strategic assets such as land should not be left to New Zealand's Overseas Investment Office, which has yet to approve the proposed sale to Shanghai Pengxin.

While Prime Minister John Key had said he would "be happy for a Chinese company to buy Lochinver," a large number of New Zealand citizens clearly would oppose the sale, Shirley said.

"The Overseas Investment Office does not have the ability or the expertise to address policy decisions such as the retention of strategic assets or the sale of land to overseas investors," said Shirley.

"China has ensured that it will retain its strategic assets, including the domestic ownership of land. It encourages overseas investment in areas that it wants to develop rather than selling its assets to the highest bidder. Perhaps it is time to consider similar policies in New Zealand."

The planned sale of Lochinver has become a major issue in the run-up to New Zealand's general election on Sept 20 and all the main opposition parties have formally declared they will severely restrict land sales to foreign buyers or even buy back land sold to overseas interests.

An online advertisement by selling agent Bayleys said Lochinver Station was valued at NZ$70.6 million ($60.17 million), "placing it at the top of the most highly valued stations in the country."