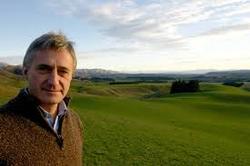 Some in the farming sector worry that Shanghai Pengxin's plans for vertical integration and the control of dairy production from farm through to processing could leave New Zealand as "just a backdrop" for a fully foreign-owned and run industry. (In the photo, William Rolleston.)

Speaking as the political furore continued around Chinese food giant Shanghai Pengxin Group's planned purchase of a major North Island farm holding, Federated Farmers president William Rolleston said concerns over the sale should not be seen as New Zealand closing itself to China.

"New Zealand has a finite amount of farmland, around one-eighth of that in China, and this farmland is the engine room of the New Zealand economy," Rolleston told Xinhua in a phone interview.

"This is why we have rules to ensure there is the right balance between the interests of local and overseas investors."

The size of the Shanghai Pengxin's planned purchase the 13, 843-hectare Lochinver Station would require the company to demonstrate to the Overseas Investment Office (OIO) that it would be of "substantial and identifiable benefit" to New Zealand before the sale was approved.

The concern was in trying to understand what the substantial and identifiable benefit to New Zealand would be, in addition to its other landholdings.

"As the aggregation of land to single entities goes up, then the test becomes a bit tougher. We want to see what the benefit equation is going to be with this particular sale," Rolleston said.

"We are absolutely open to foreign investment as it strengthens our link with important markets we are looking to deepen our relationship with," he said.

"Many overseas farming investors immigrate here to actively farm. It is positive to see Filipino farm workers in our dairy industry now progressing onto share-milking and farm ownership. We similarly welcome Chinese immigrants who wish to actively farm too. "

"As we wish to understand and work closer with China, we are completely open to investment in our processing industry. This gives us insight into what our Chinese customers want," he said.

"This processing and marketing relationship is a partnership that enables New Zealand farmers, be they of European, Asian or Chinese descent, the ability to farm sustainably."

"These pressures continue and are constraining land supply, perhaps best reflected in the market price farmers need to pay for land," he said.

The planned sale of Lochinver has become a major issue in the run-up to New Zealand's general election on Sept. 20 and all the main opposition parties have formally declared they will rigorously restrict land sales to foreign buyers or even buy back land sold to overseas interests.

Opposition to the planned sale hardened after Prime Minister John Key said Monday that he was happy for the sale to go ahead so long as it went through the proper process and was approved by the OIO.

Some in the farming sector worry that Shanghai Pengxin's plans for vertical integration the control of dairy production from farm through to processing could leave New Zealand as "just a backdrop" for a fully foreign-owned and run industry.

They have compared the dairy sector to New Zealand's forestry sector, which has largely been taken over by foreign interests, resulting in the loss of local wood processing businesses and jobs as the logs are exported unprocessed.

Rolleston said if the government kept a register of land held by overseas interests, it might take "the political sting out of the argument" as it could show how much land had been returned to New Zealand ownership or whether the overseas owners had taken residency in the country.

An online advertisement by selling agent Bayleys said Lochinver Station was valued at 70.6 million NZ dollars (60.17 million U.S. dollars), "placing it at the top of the most highly valued stations in the country."

The Lochinver deal would be the third major purchase by Shanghai Pengxin to draw opposition in the last three years.

In October last year, Shanghai Pengxin Group announced it was looking to take over South Island-based Synlait Farms Ltd., of which it already owns 74 percent through New Zealand Standard Farm, a subsidiary of its Milk New Zealand unit, prompting Federated Farmers to express concern over vertical integration then too.

Shanghai Pengxin bought 16 North Island dairy farms for 200 million NZ dollars (170.31 million U.S. dollars) in 2012 after a controversial and long legal battle through the New Zealand courts, which resulted in changes to the way the OIO had to assess land purchases by foreign interests.