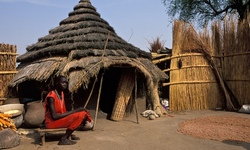 A traditional homestead in Gambella, the remote region of western Ethiopia where many villagers have been cleared from their land. (Photo: Alamy)

The UK's Department for International Development (DfID) is to face a full judicial review over its alleged funding of rights abuses in Ethiopia.

On Monday, a high court judge ruled that "Mr O", an Ethiopian farmer who claims that British aid helped fund a brutal forced resettlement programme in his home country, has an arguable case against the UK government.

His lawyers argue there is evidence that British aid contributions to Ethiopia's promotion of basic services (PBS) programme has helped support its controversial villagisation programme, which aims to move 1.5 million rural families from their land to new "model" villages across the country.

Since it was launched in 2010,the resettlement programme has been dogged by allegations of forced evictions, rapes, beatings and disappearances.

Ethiopia is one of the biggest recipients of British aid and the UK is a major donor to its PBS programme, which is intended to improve access to education, healthcare and other services for poor and nomadic people. However, human rights campaigners say British money is also being used to pay the salaries and administrative costs of the officials running the relocation scheme.

Mr O, who is represented in his action against the UK government by the London-based firm Leigh Day, claims he was violently evicted from his farm in the Gambella region in 2011. He says he was beaten and that he witnessed rapes and assaults as government soldiers cleared people off their land.

He has told his lawyers that he was forced to resettle in a new village where he and others were given no access to farmland, food or water and where they could not make enough money to feed their families. He has since moved to Kenya.

After assessing his case, Mr Justice Warby gave permission for Mr O's lawyers to argue at a full judicial review that the UK government violated its human rights policies by failing to have systems in place to properly investigate and respond to reports of human rights violations linked to the villagisation programme.

He added that under current legislation the UK government had a legal obligation to respect and uphold human rights, and that Mr O's case deserved a full hearing.

Leslie Lefkow, deputy Africa director at Human Rights Watch, said: "The UK is providing more than £300m a year in aid to Ethiopia while the country's human rights record is steadily deteriorating." DfID, she said, had made little or no effort to interview people affected by villagisation, many of whom have become refugees in neighbouring countries.

Lefkow described the ruling as a first step: "It should be a wake-up call for the government and other donors that they need rigorous monitoring to make sure their development programmes are upholding their commitments to human rights."

A spokesman for DfID said the UK had never funded the Ethiopian resettlement programmes, adding: "Our support to the protection of basic services programme is only used to provide essential services like healthcare, schooling, and clean water."