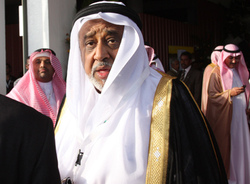 BEIRUT, Jul 30 2014 (IPS) - Food price rises as far back as 2008 are believed to be the partial culprits behind the instability plaguing Arab countries and they have become increasingly aware of the importance of securing food needs through an international strategy of land grabs which are often detrimental to local populations.

Between 2007 and 2008, rises in food prices caused protest movements in Egypt and Morocco. “This has become an important concern for countries in the Arab region which want to meet the growing demands of their populations,” notes Devlin Kuyek, a researcher at GRAIN, a non-profit organisation supporting small farmers and social movements in their struggles for community-controlled and biodiversity-based food systems.

Arab countries, which appear to have started losing confidence in normal food supply chains, are now relying on acquisitions of farmland around the world. Globally, land deals by foreign countries were estimated at about 80 million ha in 2011, according to figures provided by the World Bank.

The 2008 international food price crisis caused alarm among policy-makers and the public in general about the vulnerability of Arab countries to potential future food supply shocks (such as, for example, in the event of closure of the Straits of Hormuz) as well as the perceived continued sharp increase in international food prices in the long term, explains Sarwat Hussain, Senior Communications Officer at the World Bank.

Increasing food prices are caused by entrenched trends that include population growth combined with high urbanisation rates, depleting freshwater sources, increased demand for raw commodities and biofuels, as well as speculation over farmland.

To face such threats, Arab countries have worked on buying or leasing farm land in foreign countries. “Investment in land often takes the form of long-term leases, as opposed to outright purchases, of land. These leases often range between 25 and 99 years,” says Hussain.

Currently, the United Arab Emirates accounts for around 12 percent of all land deals, followed by Egypt (6 percent) and Saudi Arabia (4 percent), according to GRAIN.

“It is however very difficult to estimate the total value of land grabbed today because most deals remain in the negotiations phase and are, for the most, very obscure ,” adds Hussain.

Land acquisitions are becoming institutionalised as clear strategies are developed by governments, which also rely on the private sector and international organisations, explains Kuyek.

Some governments of member states of the Gulf Cooperation Council (GCC) – Bahrain, Kuwait, Oman, Qatar, Saudi Arabia and the United Arab Emirates – have adopted explicit policies to encourage their citizens to invest in food production overseas as part of their long-term national food security strategies.

Such policies cover a variety of instruments, including investment subsidies and guarantees, as well as the establishment of sovereign funds focusing exclusively on investments in agriculture overseas.

Countries falling victims of the land acquisition mania range from Western countries such as Australia, New Zealand, Poland, Russia, Ukraine and Romania to countries in Latin America, Asia or Africa.

Globally, the largest targeted countries are Brazil with 11 percent by land area; Sudan with 10 percent; Madagascar, the Philippines and Ethiopia with 8 percent each; Mozambique with 7 percent; and Indonesia with 6 percent, according to the World Bank.

“The main driving force seems to be biofuels expansion, with exceptions in Sudan and Ethiopia, which are seeing a trend towards growth of food from Middle Eastern and Indian investors,” Hussain points out.

Governments, often through sovereign wealth funds, are negotiating the acquisition or lease of farming land. According to GRAIN, the Ethiopian government has made deals with investors from Saudi Arabia, as well as India and China among others, giving foreign investors control of half of the arable land in its Gambela region.

Powerful Saudi businessmen are pursuing deals in Senegal, Mali and other countries that would give them control over several hundred thousand hectares of the most productive farmlands. -“The [Saudi Arabian] al-Amoudi company has acquired ten thousand hectares in south western Ethiopia to export rice,” notes Kuyek.

Besides food security concerns, it appears that such acquisitions are increasingly perceived by international companies as a useful investment tool allowing for diversification. A number of investment companies and private funds have been acquiring farmland around the globe.  These include Western heavyweights such Goldman Sachs and Deutsche Bank, but also Arab players such as Citadel Capital, an Egyptian private equity fund.

Kuyek explains that large land acquisitions are triggering debates in developing countries and can become electoral issues.  Land grabs can have adverse repercussions on indigenous populations which find themselves evicted from the land they have used over generations for cultivation and irrigation.

“People are concerned by the sale of their local resources,” adds Kuyek.

This has translated into the creation of local groups that are challenging large land sale deals negotiated by their governments. As an example, farmers in Serbia have made formal complaints about the purchase of farmland by an Abu Dhabi company, Al Rawafed Agriculture, according to The National newspaper.

Small opposition groups will nonetheless face increasing difficulty in fighting-off governments and institutions, for which food security has become a matter of political survival.