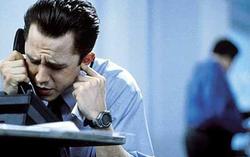 Suspicious investments that have come to the attention of Martin Tilley, director of technical services at Dentons, include storage units and African farmland, as well as fractional investment in Eastern European arable land. Above: a still from the film Boiler Room.
CityWire | 28 July 2014

Overseas property investments offering investors a two-week holiday as part of the deal sound suspiciously like a new type of timeshare, but this isn’t the only way scammers are trying to get people to part with their hard-earned pension cash.

The government has made it easier to access your pension pot in retirement and take the entire sum in cash meaning the number of people caught out by pension liberators should start to reduce.

Pension liberation schemes offer savers early access to their pension, which can be taken at age 55, but often do not warn them that doing so will leave them with a 55% tax bill. Some people have been unfortunate enough to have their entire pension stolen.

The Pensions Regulator (TPR) has also been taking a tough approach to liberation and last week announced a new advertising campaign that tells the real-life tales of people who have been pushed to suicide and homelessness after losing their money through these scams.

While consumers may have taken notice of the regulator’s campaign, which features a scorpion and tagline ‘don’t let your pension become prey’, they may still become prey for dodgy investment scams that try and encourage you to invest your pension savings.

Martin Tilley, director of technical services at self-invested personal pension (Sipp) provider Dentons, said while liberation was being tackled by a series of targeted campaigns his team has been refusing to allow pension savings to be invested in a growing number of concerning investments.

Tilley’s team acts as gatekeeper when it comes to where savers can invest their Sipp money and over recent months it has been approached by salespeople trying to convince them of the merits of a number of schemes.

One of the trends he is most concerned about is for overseas property developments schemes, one of which was based in Cape Verde and is encouraging individuals to invest their pension in holiday homes and rentals.

‘It says Cape Verde is on the same latitude as the Caribbean and has the same holiday appeal except it takes five hours to get there instead of nine hours,’ he said. ‘But what they don’t tell you is that it has no infrastructure, no natural resources and it is overdeveloped in terms of these developments.’

In a final bid to entice investors they are also offered a two-week holiday every year in the development they are funding.

‘They are told they can buy [the investment] in their Sipp and can spend two weeks [in Cape Verde] every year, it’s like timeshares all over again.’

Other suspicious investments that have come to Tilley’s attention include storage units and African farmland, as well as fractional investment in Eastern European arable land.

One such Eastern European investment was found out to be land just 30 miles from Chernobyl, the site of a nuclear accident in 1986, however when challenged about the investment’s location the salesman told Tilley: ‘The wind was blowing the other way [on the day of the disaster.’

‘This is just like the old boiler room scams,’ said Tilley.

In order to avoid these scheme investors should take heed of the old adage: if it seems too good to be true, it is.

Tilley said the people selling these investments are convincing and are also trying to cash in on British enthusiasm for owning property and land.

He said savers should think twice before investing their pension, or taking money out of their pension to invest, in these schemes.

‘All of these investments sound plausible to the uninitiated.’

Tilley said investors should start at the point of thinking the investment they are being offered isn’t true and only invest if the claims can be backed up by fact.

He warned that the literature published by many of these scheme was unregulated and could not be trusted.

‘The literature is unregulated and could be full of lies… Treat it all as lies until you can prove it is not,’ he said. ‘Of all [investment that are pitched to his team] we throw out two-thirds of them.’

Unfortunately many people have already been stung by poor Sipp investments and dodgy scams. Last month the Financial Ombudsman Service (FOS) reported a surge in Sipp complaints in the three months from April – recording 241 complaints compared to 132 in the same period last year.

Tilley said the increase in more esoteric investments rather than problems with Sipps had caused the spike and that while the regulator was tightening the net on dodgy investments there was ‘still a lot of rubbish [that has been invested in] that needs to come out’.