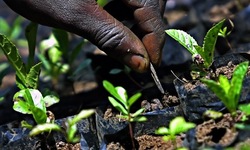 REDD promises carbon offsetting will empower local communities in the developing world while conserving forests - but critics say the scheme is fuelling genocidal evictions of indigenous people from their lands. (Photo: Tony Karumba/AFP)

Between 2000 and 2010, a total of 500 million acres of land in Asia, Africa, Latin America and the Caribbean was acquired or negotiated under deals brokered on behalf of foreign governments or transnational corporations.

Many such deals are geared toward growing crops or biofuels for export to richer, developed countries – with the consequence that small-holder farmers are displaced from their land and lose their livelihood while local communities go hungry.

The concentration of ownership of the world's farmland in the hands of powerful investors and corporations is rapidly accelerating, driven by resource scarcity and, thus, rising prices. According to a new report by the US land rights organisation Grain: "The powerful demands of food and energy industries are shifting farmland and water away from direct local food production to the production of commodities for industrial processing."

Less known factors, however, include 'conservation' and 'carbon offsetting.'

In west Kenya, as the UK NGO Forest Peoples Programme (FPP) reported, over a thousand homes had been torched by the government's Kenya Forest Service (KFS) to forcibly evict the 15,000 strong Sengwer indigenous people from their ancestral homes in the Embobut forest and the Cherangany Hills.

Since 2007, successive Kenyan governments have threatened Sengwer communities in the Embobut forest with eviction. A deadline for residents to leave the forest expired in early January, prompting the most recent spate of violence. The pretext for the eviction is that the indigenous Sengwer – labelled wrongly as 'squatters' – are responsible for the accelerating degradation of the forest.

Elsewhere in Kenya's Mount Elgon forest, however, the KFS' track record reveals a more complicated story. In 2010, the indigenous Ogiek were issued a deadline to relocate in the name of forest conservation and reforestation. In February this year, Survival International reported that, like the Sengwer, the Ogiek continued to be violently evicted from their homes in violation of court orders, with reports of government officials and their supporters seizing their land.

While deforestation is undoubtedly linked to the activities of poor communities, the Kenyan government's approach illustrates favouritism toward parochial vested interests. In addition to the indigenous communities, the forests are also inhabited by many thousands of tea-planters, loggers, and squatters.

According to an internal report by the International Union for Conservation of Nature (IUCN) in 2000, reviewing the Kenyan government's internationally-funded conservation programme, "the forests of Mt Elgon are not being sustainably managed." The report highlighted "unsustainable harvesting of both indigenous and plantation forest on Mt Elgon," routine flouting of "regulations and procedures for sound management", "the rate of forest plantation harvesting" far exceeding "the rate of replanting", lack of supervision of controls on "forest harvesting operations authorised by the Forest Department," and consequently "extensive loss of forest resources."

The IUCN review also alluded to the role of the Kenyan government's relationship with RaiPly Ltd, a Kenyan company involved in manufacture of wood products: "It is not known why or how RaiPly presumably received a license to harvest indigenous species, thus circumventing the ban on harvesting in indigenous forests."

Official Kenyan parliamentary records from May 1999 show that Kenyan political representatives have been concerned about these issues for some time. One question put to Kenya's then assistant minister for natural resources, Peter Lengees, by a Kenyan MP pointed out that "trees are being cut in Mt. Elgon forest," threatening the region's rivers "from both sides." Local government officials, the MP accused, "have shared up the area between these two rivers" which are now "drying up."

Lengees denied any knowledge of this, prompting a further question from late politician George Kapten, who said that "lorries from Raiply" had been ferrying high-value teak timber from Mount Elgon forest. "And I wish to add that the highest authority in this country has shares in RaiPly", he added. Lengees repeated his denial but admitted that RaiPly was "licensed to cut trees from some forests in Kenya."

Currently, RaiPly is among several major companies that are exempt from a partial government ban on logging. Effectively, the government is permitting powerful logging companies to accelerate deforestation to buoy the Kenyan economy while systematically persecuting indigenous communities whose environmental impact is comparatively negligible.

The devastating plight of Kenya's indigenous peoples is symptomatic of the flawed approach to conservation on the part of international agencies.

The World Bank's Natural Resource Management Programme (NRMP) with the Kenyan government, launched in 2007, has involved funding for projects in the Cherangany Hills under the UN's Reducing Emissions from Deforestation and Forest Degradation (REDD) programme, including "financing REDD+ readiness activities" some of which began in May 2013.

Under the REDD scheme companies in the developed world purchase carbon credits to invest in reducing emissions from forested lands. Those credits turn up on the companies' balance sheets as carbon reductions. In practice, however, REDD schemes largely allow those companies to accelerate pollution while purchasing land and resources in the developing world at bargain prices.

A FPP background brief on the role of the World Bank claims that the implementation of NRMP – overseen by the very same KFS forces conducting a scorched earth campaign in Cherangany – violates the Bank's own operational safeguard policies. A formal Sengwer complaint to the Bank lodged in January last year alleged that human rights abuses by Kenyan forces were "a direct result" of the World Bank-funded programme:

"One example of the harm caused by the project was that it changed the border of the Cherangany forest reserves," according to the FPP brief, "such that Sengwer families, without any consultation or notice, found themselves on the inside of the forest reserve and therefore automatically subject to eviction by the KFS, evictions effectively funded by the World Bank. These evictions were customarily executed by burning homes and food stores in 2007, 2008, 2009, 2010, 2011 and 2013."

In a statement in February, the World Bank disavowed any link between its programme and the forced evictions.

The Sengwer's complaint is currently under investigation by the World Bank Inspection Panel. Although the report is now complete, a Bank spokesperson, Phil Hay, said that it would not be reviewed by the Board until August or September.

"The World Bank is not associated with the evictions and has not supported or financed resettlement in forest areas under the now closed Natural Resource Management Project (NMRP)", said Hay. "Nonetheless we are not bystanders either. We have been concerned about how the evictions have been handled and have been in frequent touch with the Kenyan government."

Notably, the Bank's professed concern here is with "how the evictions have been handled", not with evictions being carried out in the first place.

A damning new report from the Rights and Resources Initiative (RRI) based in Washington DC thus warns that the UN and World Bank approach to REDD is paving the way for large-scale "carbon grabs" by foreign governments and investors, putting at risk the land rights, livelihoods and lives of indigenous communities.

The report surveyed 23 low and middle income countries in Latin America, Asia, and Africa, covering 66 percent of the developing world's forests, concluding that REDD had not established laws or mechanisms by which indigenous peoples and local communities could profit from the carbon in the forests they inhabited.

At the United Nations climate negotiations in Warsaw in November 2013, delegates reached an agreement that would allow REDD to move forward which, however, excluded questions around who should control and benefit from the new carbon value found in standing forests.

Instead, the World Bank Carbon Fund's approach to defining carbon rights has been widely criticised by civil society groups for creating conflict between new property rights to carbon, and existing statutory and customarily held rights of local communities. The lack of clear safeguards and measures opens up an unprecedented opportunity for corporate and government land grabbing.

Tony La Viña, Dean of the Ateneo School of Government and chair of the intergovernmental REDD negotiations at the climate conferences in Copenhagen and Durban, said: "The carbon markets, when up and running, need to support the forest stewardship of the people who live there, and not provide national governments with yet another tool to dispossess their citizens from the natural resources they have cared for and depended on for generations."

According to the No REDD in Africa network (Nran) – a group of African civil society organisations – precisely because indigenous people and their rights are not factored into REDD principles, their implementation could lead to outright genocide.

Chris Lang, a British forestry expert who runs the REDD Monitor blog, agrees that under REDD schemes involving forested or agricultural land, "the rights to the use of that land could be taken away from indigenous peoples who depend on their forests for their livelihoods. Destroying livelihoods on this scale could conform to the parts (a), (b), and (c) of the [UN Convention] definition of genocide."

This article was inspired by a blogpost by British film-maker Dean Puckett who will be traveling to Kenya in August to investigate the plight of the Sengwer.

Dr. Nafeez Ahmed is an international security journalist and academic. He is the author of A User's Guide to the Crisis of Civilization: And How to Save It, and the forthcoming science fiction thriller, ZERO POINT. ZERO POINT is set in a near future following a Fourth Iraq War. Follow Ahmed on Facebook and Twitter.