Saudi’s Almarai, Pepsico to invest at least $345m in Egypt 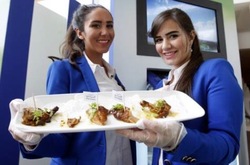 Saudi’s Almarai, Pepsico to invest at least $345m in Egypt

Cairo/Duabi: Saudi Arabia’s Almarai , the Gulf’s biggest dairy company, and US soft drinks giant PepsiCo will invest at least $345 million in Egypt over the next five years, the Saudi firm said on Sunday.

The announcement was a fresh sign that after three years of stagnation because of political and economic turmoil following Egypt’s 2011 revolution, foreign investment in the country may revive as a measure of stability returns.

The Almarai investment would be conducted through Egyptian dairy and juice products firm International Company for Agro-Industrial Projects (Beyti), a subsidiary of International Dairy & Juice Ltd, which is owned 52 percent by Almarai and the remainder by Pepsico.

Most of the money would come from equity injections by the joint venture partners in line with their ownership ratios, while Beyti would take on some debt.

Almarai will finance its investment through its own cash flow, with the financial impact gradually reflected on its group balance sheet between the third quarter of this year and 2019, the company said.

The additional money would be spent on another dairy farm, which Badran said would be the biggest in Egypt, accommodating 20,000 cows. He added that this would depend on obtaining government approval for the purchase of land.

Egypt’s newly appointed investment minister Ashraf Salman said on Saturday that he was aiming for $10 billion of foreign direct investment for the coming fiscal year that starts in July, and $14 billion in three years. FDI for the first nine months of the current fiscal year was $4.4 billion.
As part of a $500 million investment plan announced for Egypt in March, Coca-Cola will build a new juice plant near Cairo in a joint $100 million project with Saudi Arabia’s Aujan Coca-Cola Beverages Co.
In addition to Egypt’s young and growing population, foreign companies see the country as a potential export base for markets in Africa and elsewhere. This year’s election of former army chief Abdel Fattah al-Sisi as president has raised hopes for greater political stability and better economic management.