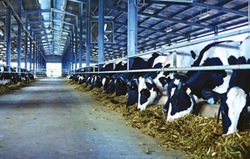 VietNamNet Bridge – Vietnamese businessmen, who have earned high profits with their finance and real estate investment deals, are now rushing to pour money into agriculture projects.

Duc Long Gia Lai Group plans to set up a subsidiary with chartered capital of VND360 billion which would specialize in growing maize, sugarcane and rubber and in breeding cows.

Bui Phap, Chair of Duc Long Gia Lai Group, said he is optimistic about the new business field. Vietnam imports $3 billion worth of maize, soybeans and fish powder every year to feed the domestic animal husbandry. As such, the domestic market could be a large and potential market for Duc Long Gia Lai’s short-term crops.

Pouring money into agriculture projects is the choice of many big investors who have lost profits in their core business fields, and are looking to other areas.

Nguyen Kim, a home appliance distributor, has also been developing rice projects for the last two years after buying stocks of a rice trading company.

Prior to that, Gemadept, a logistics and shipping firm, decided to pour money into a project to grow 30,000 hectares of rubber in Cambodia.

Dang Kim Son, head of the Institute Agriculture and Rural Development Policies Institute, commented that it is a good thing for businessmen to pour money into agriculture production.

According to Son, only 1-2 percent of Vietnamese enterprises have invested in the agriculture sector, but if the figure increased tenfold, Vietnam’s agriculture would have a new face.

However, Son warned that it would not be easy to develop high-technology agriculture in Vietnam.
Investors have to pour big capital into agriculture projects, but they cannot expect to take back the investment capital soon.

Hoang Anh Gia Lai, for example, has poured $1.2 billion into agriculture projects in Laos over the last seven years, but it could only begin harvesting in 2013.

TH True Milk has invested $350 million in its milk cow breeding project so far. Its fresh milk products have been available in the market, but analysts say it will take the company a long more time to break even.

She also said that Vinamilk incurred losses in the first three years of breeding cows and it only began make a profit in 2013.

Meanwhile, due to the limited land funds, it is difficult for investors to find large land plots for large-scale projects. This explains why Vietnamese businessmen have to develop projects in neighboring countries.