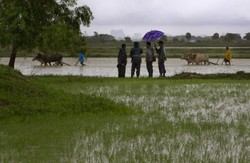 In this June 5, 2013 photo, farmers prepare the soil for planting rice in a field which was confiscated in 1992 by the Myanmar security forces in Dala, southeast of Yangon Myanmar. About three hundred farmers led by social-justice activists entered the 500-acres (2-square kilometer) land on June 5, 2013, and started preparing the soil for paddy cultivation defying the government’s ban as navy officers watched armed with guns. Despite new freedoms in Myanmar, new laws are still used to punish protesters and small-scale farmers for protesting land grabs. (AP Photo/Gemunu Amarasinghe)

Massive land-grabs are driving commercial agriculture and investment around the world, often at the expense of the world’s small-scale farmers – who feed 80 percent of the developing world.

WASHINGTON — The U.S. public and private sectors are among the leading drivers of a global drive to snap up usable – and often in-use – agricultural land, in what critics say remains a steadily increasing epidemic of “land-grabbing.”

Africa and Southeast Asia are together seeing some three-quarters of problematic large-scale land acquisitions, according to new research from the global development group ActionAid. Africa remains a particular focus of this investment drive, constituting six of the top 10 countries experiencing significant land-grabbing. The continent has seen at least 40 million hectares switch hands in recent years as part of large-scale sales or leases.

However, land speculation is currently affecting almost all continents. The report warns of particularly negative effects for the estimated 2.5 billion people worldwide that rely on small-scale agriculture to meet their families’ needs. And this impact is felt far more broadly, as those smallholders, a majority of whom are women, provide the food that feeds some four-fifths of the developing world, according to the United Nations.

“Economic data has shown that a 1% rise in agricultural per-capita [gross domestic product] reduces poverty five times more than a 1% increase in GDP in other sectors, especially amongst the poorest people,” the ActionAid report, released Tuesday, notes.

“Yet … in many of the world’s poorest countries, vast tracts of land are being sold or leased under long-term deals to domestic and multinational companies and foreign governments looking to secure farmland for commercial agricul­ture, timber, energy or mining projects, or simply as an asset.”

The phenomenon has multiple drivers, spearheaded by the financial sector, agricultural companies and governments themselves. The post-2008 economic downturn has led many investors to see land as a particularly safe place to park their money — a situation reinforced by high food and commodity prices and, in particular, a growing hunger for biofuels.

And while such data is notoriously hard to come by, ActionAid cites findings suggesting that the United States today is by far the largest origin of such land deals. In terms of confirmed large-scale land investments, U.S. investors have taken control of some 7.1 million hectares — more than double that of the country in second place, Malaysia, with 3.4 million hectares.

While such land is often characterized as barren or infertile, ActionAid’s researchers note that about half of documented large-scale land deals have been in use for crop production by local communities. Much of the rest was likely being used by pastoralists or was subject to traditional tenure agreements.

“Pastoralism is our main source of income, but today we are in a very difficult situation because the lands we use for food and grazing are blocked by fences and water channels,” Bayal Sow, a member of the Ngith community in Senegal, told ActionAid researchers.

The Ngith live within a forest preserve in the country’s northeast, part of which has been acquired by an Italian-backed agribusiness company, Senhuile-Senethanol, whose activities are now said to be impacting on a spectrum of livelihood activities. Bayal Sow warns that the Ngith are “ready to defend our interests to the end because we have nowhere to go.”

The land-grabbing phenomenon, marked by large-scale acquisitions that don’t adequately take into account local rights and needs, has received strong media coverage in recent years. Yet that narrative has typically characterized this process as one of Western corporations marauding through developing countries, taking advantage of lax legal oversight in concert with corrupt local elites.

In many instances that is indeed an accurate picture. Yet undergirding and facilitating the companies actually carrying out many of these investments, ActionAid says, is a host of pointed government policies, in both developing and donor countries. Further, international financial institutions such as the World Bank, along with multilateral initiatives, are directly spurring on this process.

Both U.S. foreign and domestic policies, for instance, are implicated in driving these global acquisitions, often in the name of international development or the environment.

“First, the entire U.S. agricultural assistance [budget] is being committed to a new international initiative that we feel is putting in place the ground conditions for these investments,” Douglas Hertzler, a senior policy analyst with ActionAid USA and a co-author on the new report, told MintPress News.

“And second, domestic ethanol policy is guiding commodity prices and helping to spur the global scramble for land. The precedent this sets is to use land to fuel cars, and this is driving up land prices everywhere.”

On the international side, Hertzler refers to the New Alliance for Food Security and Nutrition, the flagship anti-hunger program among the Group of Seven, or G-7 — the group of leading industrial nations that also included Russia until it was suspended in March. A key initiative spearheaded by President Barack Obama’s administration, the New Alliance was announced when the president hosted the G-8 summit at Camp David in mid-2012.

One of the program’s main priorities is to leverage private-sector agricultural investment in Africa. To date, the New Alliance is operating in 10 African countries and partnering with some 160 local and global companies. Within its first year, the program was able to spur around $3.7 billion in private investment in African agriculture, according to the White House.

The U.S. component of this program is called Feed the Future. Ahead of a major food summit here on Thursday, the administration noted that its anti-hunger and poverty efforts have “gathered $7 billion in private sector commitments to African agriculture.”

Any such policy focus is laudable and, many say, necessary for any long-term development success, but ActionAid’s Hertzler says that such a rhetorical emphasis is misleading.

“The New Alliance is specifically fostering large-scale commercial agriculture. And while there’s a lot of language about smallholder farmers in New Alliance documents, if you look at the companies involved, that doesn’t support the reality,” he said.

“By and large, these policies have been crafted without any input from small-scale farmers, in order to benefit large agricultural producers from Europe and North American in Africa.”

He says the end effects have been direct as well as tangential. While many hundreds of cases have been documented of companies and institutional investors purchasing or leasing large tracts of land with little thought given to local communities, policies such as those promoted by the New Alliance are also stimulating significant land acquisition by national elites.

Hertzler has particular experience in Tanzania, where he says wealthy urbanites have recently started acquiring massive tracts of rural land in anticipation of a shift toward more large-scale commercial agriculture. These investors may not be formally aligned with the New Alliance, he says, but they are profiting from related policies aimed at identifying land for potential buyers.

Hertzler spoke with MintPress from the sidelines of a global summit taking place this week in Rome, under the auspices of the U.N. Food and Agriculture Organization. There, government representatives are aiming to agree on a set ofprinciples on responsible agricultural investment.

Although land and public investment had yet to be negotiated at the time of the interview, Hertzler says that ActionAid and other groups are urging negotiators to adopt strong language around issues involved with land-grabbing. And while the draft documents do clearly recognize the importance of small-scale farmers, Hertzler says they will need to specifically acknowledge the importance of public-sector investment in smallholders — something that many developing countries, particularly in the rush to woo foreign and domestic private investment, have largely failed to do.

In fact,voluntary guidelines on related issues, especially those surrounding land tenure, were agreed upon two years ago, agreements that the new principles will build upon. While neither the guidelines nor the principles would be legally binding, they are bound up with internationally agreed human rights — such as the right to food — for which countries do have binding obligations.

Hertzler says these guidelines have yet to be fully implemented, though, even as investors have quickly moved forward.

“Governments have all affirmed these guidelines, yet we’re seeing this rush to bring in large-scale commercial agricultural investments before those guidelines are actually implemented,” he said.

“No one’s really doing a lot to secure land rights. And while many countries have made commitments to implement the guidelines, that won’t happen without pressure, particularly from countries most affected by unclear land rights and land-grabbing.”

Still, others emphasize that development approaches that place significant emphasis on foreign investment will always be problematic.

“Efforts in Rome to promote ‘voluntary’ principles for responsible agricultural investment will hopefully do some good, but one cannot continue to uphold foreign investment in agriculture as the panacea to the developing world’s problems,” Anuradha Mittal, the executive director of the Oakland Institute, a leading U.S. watchdog on land-grabbing worldwide, told MintPress.

“The focus has to be on robust government policies that protect smallholders, pastoralists, fisherfolks and the indigenous while guiding investment in smallholder agriculture — which still provides 80 percent of the food in the developing world.”