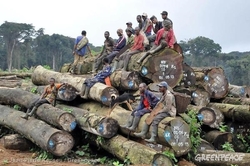 Amsterdam - Illegal and corrupt behaviour by foreign-owned companies engaged in establishing large palm oil plantations not only threatens local communities and forested areas throughout west and central Africa, but will seriously undermine legislation being set up between African countries and the European Union to prevent just that says Greenpeace International.

In a new report published today, Greenpeace reveals how one company in Cameroon, has colluded with government officials to illegally obtain a permit to export timber that itself was illegally felled in order to establish a palm oil plantation in the South West region of the country.

Licence to Launder also shows how Herakles Farms, nominally a US company, is attempting to rescue its dire financial situation by using its illegally obtained licence to export timber to China.

"Herakles Farms has been able to operate with impunity in Cameroon for several years now despite lacking all the required legal documentation/approval to do so," says Irène Wabiwa, head of forests campaign for Greenpeace Africa.

"The company claims that profits from any of its timber would go to the Cameroonian people, but its current attempts to commercialise illegal wood demonstrates that its true agenda is simply to rescue a financially stricken project."

Cameroon is one of several countries in the Congo basin that has signed a Voluntary Partnership Agreement (VPA) with the European Union, part of the bloc’s FLEGT plan aimed at better forest governance and combating illegal timber trade.

Recent research indicates an important part of the tropical timber on the international market comes from "illegal forest conversion operations". For VPAs to be effective, this reality will need to be taken into account during further implementation of these agreements.

"Herakles Farms is a test case for the credibility of forest governance in the VPA era. The EU will have to show it is able to get its partner, Cameroon, to honour the partnership agreement," says Irène Wabiwa.

"Considering the inaction of the Cameroon government, Greenpeace has brought the case to the attention of the national prosecutor, asking for the timber to be seized and that Herakles Farms and any government officials involved in the illegal allocation of the permit are held accountable."

The Herakles Farms project has been beset by controversy from the time it was announced in 2009. It has provoked fierce opposition from local communities and conservation scientists as well as local and international civil society over its activities which will destroy a densely forested area.

Hundreds of thousands of hectares of land in central and West Africa have been leased to foreign-owned organisations seeking to develop large-scale industrial palm oil plantations. Those deals are opaque in nature and should be seen in the wider context of land grabbing on the continent.

Africa is seen as a next frontier by some of the world’s largest palm oil producers who hail from South East Asia where large-scale production is a key driver of deforestation. Several of these new projects are being developed in the Congo Basin, home to the second-largest rain-forested area in the world.

For more on Herakles Farms and palm oil in Africa, click here.

The lead up to this summer's World Cup is already dominating international news with every manager's squad selection being scrutinized while analysts attempt to predict the tournament's winner.

Herakles Farms laid solid team foundations by signing an illegal contract with the Cameroon Government in 2009. In 2010, the company unlawfully established oil palm nurseries prior to conducting an environmental impact assessment and with no right to the densely forested land it occupied. In 2011, the firm raised its game violating a Cameroonian court moratorium on its activities.

Known as SGSOC (the name of its local subsidiary) in Cameroon, the company sustained a key injury as it was busted for illegal logging by the Cameroonian Ministry of Forestry and EU-funded independent forest observer in 2012. Their form hit an all-time low in 2013 when its right to clear the forest was suspended by the Ministry of Forestry.

As investors fled and employees were furloughed, the few remaining supporters called for new management. New men were called in to stabilise Herakles and they acquired Presidential Decrees to finally officialise their presence in Cameroon (while violating law's on community right to consultation) – although ambitions were tempered when they received the right to only 20,000 hectares of land, way below the 70,000 they were originally after. The comeback was so impressive Herakles Farms was even named to Global Exchange's prestigious top 10 corporate criminals list.

Great suspense surrounds the company's performance and preparations in the lead up to the 2014 World Cup…and Herakles has not disappointed.

Newly published Greenpeace research has revealed that Herakles Farms, using a front company, colluded with Cameroon's Minister of Forests to unlawfully obtain a logging permit allowing it to clearcut 2,500ha of forest and export valuable species of timber, while paying 17 times fewer royalties to local communities than average.

Herakles had previously declared in an open letter it would leave the timber for the Cameroonian Government to make "many millions of dollars." In exchange, the company argued, it should be entitled to pay a very low land rental fee for its palm oil plantation. "Say one thing and do the opposite" has come to define Herakles' tactics and style of play, but they are not alone:

Cameroon and the European Union signed a trade agreement (known as VPA) to eradicate illegal logging and part of worldwide efforts to reduce tropical deforestation.  The VPA, which entered into force in 2011, requires Cameroon to "verify the legality of the timber and derived products" sold not only to the EU, but all other markets.

The implementation of the VPA in Cameroon has been seriously delayed. Now the Minister of Forest's decision to illegally grant a logging permit to a company posing as a front for Herakles – without an auction (as required by law) – casts serious doubt on Cameroon's intention to respect its obligations under the VPA.

Equally worrisome has been the EU's refusal to take a strong stance on the Herakles' case. Despite requesting clarification on the legal status of Herakles' timber from the Cameroon Government no less than three times, the European Union has cited a delay in VPA implementation to explain why they have not used their influence to push Cameroon to enforce legality.

The VPA's credibility is floundering, but it didn't stop the EU-Cameroon joint progress report published this month to make the claim that "considerable progress" is being made.

Greenpeace has filed a complaint with Cameroon's public prosecutor to have the illegal timber seized, logging permit cancelled, and wrongdoers prosecuted.

The question remains, will anyone blow the whistle on this out of control team and set an example that this sort of foul play should not be allowed to threaten Africa's forests and communities?

Or will the EU let Herakles and Cameroon continue to play the great game of illegal deforestation, without a referee?

You can help, demand the EU and Cameroon give Herakles Farms a red card!

Brendan Schwartz is a forests campaigner at Greenpeace Africa.