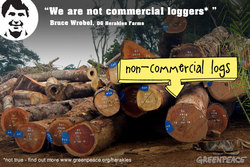 (NewsWatch Cameroon)--A demonstration the likes of which had never been seen before in that locality was witnessed in Babensi 2 village last Friday April 4 when more than 300 people staged a protest march against the American agro-industrial company Herakles Farm (Sithe Global Sustainable Oils Cameroon - SG SOC), a local branch of Herakles Farms in Cameroon. In a move that observers described as a repeat of the land crisis that struck Bakweri indigenes and the Cameroon Development Corporation, CDC, the people of Babensi 2 village, in Nguti sub division faulted the public authorities for turning a blind eye to the encroachment into their land by the American agro industrial company.

Holding up placards bearing messages such as; “SG SOC is out to kill the Babensi 2 man, they are cutting down our cocoa farms as well as destroying our timber and non-timber products….”, the villagers marched with petitions to the offices of the Divisional officer, the Gendarmerie Brigade commander and the Chief of Public security for the area, calling on them to stop Herakles Farms from carrying on with their “nefarious activities”.

According to Afue Divine Ejabi who led the protest march, the locals are insistent that the American company quit their land for “they do not have any convention with the Babensi 2 people”.

“The Babensi man has never signed any convention with SG SOC”, Divine maintained. “Today however, they are on our land, destroying our timber as well as all our non-timber products. This is not correct”.

Although Divine is aware that the American agro industrial company has signed a convention with the government of Cameroon which underpins the establishment of an oil plantation in some parts of the Southwest region, including Nguti, he is utterly dismissive of an agreement which has no legitimacy in the eyes of the locals. The leader of the protest told NewsWatch that they are calling on the administration to find an immediate solution that would lead to the ousting of the American company from their forest… without which they would be up in arms against the company.

But the villagers are also demanding that even before SG SOC leaves, the company should make available compensation for the “damage” already caused to their forest. From the messages displayed during the protest march, Babensi 2 inhabitants are bent on having SG SOC pay for all the devastation that has been wreaked by Herakles - the destruction of cocoa farms as well as timber and non-timber forest products…

“We cannot even eat bush meat; we don’t have good drinking water because SG SOC has polluted all the water supplies, our shrines have been destroyed due to the cutting down of our forest by SG SOC….have you forgotten that we are in Africa?” Divine questioned further.

One of the protesters, nonagenarian Mami Aginess Ejuba sounded a note of warning over the fate of their children should SG SOC continue its activities in Babensi 2 village. “We di still born pikin them - wusai them go get bush…” she said.

According to the old woman, the locals make their living from non timber products in the forest like “njangsa”, pepper, mangoes, plantains, cassava, etc. Allowing a company like SG SOC to cut down the forest for a palm plantation is an insidious way of “killing” them.

Like most others, Mami Aginess maintained that Babensi 2 does not want “American Development”; people merely want the forest which is their only source of income to remain intact so they can sustain their families.

“Now that SG SOC has destroyed all the timber, our children will not have timber in future when they will be constructing their houses; do you call that development?” she asked?

In conformity with the other protesters, Mr. John Ebenki said the felling of the forest by SG SOC has had many negative effects on the population. “The community has been exposed to diseases like onchocerciasis spread by the black fly which is terribly detrimental to human health - these trees could serve as a useful barrier against such mishaps…”

Mr. Ebenki who regretted that some medicinal tree species that used to exist in their forest can no longer be found also protested because the sap from the trees being “destroyed” by SG SOC has damaged local water supplies, rendering them “non-potable”.

Though the protesters did not meet the Divisional Officer for Nguti in his office, they were received by his assistant who indicated that their complaint will be forwarded to the appropriate quarters.

Efforts to reach officials of SG SOC in Nguti by this reporter yielded no fruits.

Herakles Farms was established in Cameroon in 2009, a year after the onset of a terrible global food crisis which affected the country like most parts of the world. More than 200 people were killed by security forces in Cameroon when they rose up in arms to protests against sudden food price hikes.

In accepting the offer of Herakles Farms to produce palm oil, the original objective of the Cameroon government was to create employment in the area and bring in some much needed foreign capital. Since then however, most of the villagers, environmental activists and some foreign organizations have been scathing in their criticism of the project.

In May 2013, Herakles Farms’ activities were suspended in Cameroon following a government injunction which analysts qualified as a response to pressure groups. But the ban was lifted that same month.

In November of the same year, President Paul Biya signed three decrees granting Herakles Farms a temporal concession of 19,843 hectares of land for three years in in Mundemba, Toko and Nguti Subdivisions.