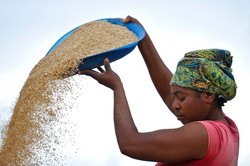 The federal government, through the Ministry of Agriculture and Rural Development and the Taraba State Government in February 2012 signed a Memorandum of Understanding (MoU) with Dominion Farms Limited to begin large scale rice production in Taraba State.

But the issue of compensations to local farmers whose farmlands were taken and allocated to the foreign firm coupled with land ownership tussle are hampering the smooth operations of the farm which government believed will cut rice importation by 15% and generate employment for thousands.

About 30,000 hectares of marshy land, situated in Gassol town of Gassol Local Government Area of the state was handed over to Calvin Burgess, an American investor and owner of Dominion Farms Limited, to begin cultivation of rice.

Former President Olusegun Obasanjo had wooed the Kenya-based American investor to begin massive cultivation and processing of rice in Nigeria, similar to the type he operates in Kenya.

Adjacent to Taraba River, the rice project will be fully irrigated and capable of producing 2.4 million crop cycles per year, according to agric experts. This farm will require up to 15,000 well trained men and women, working daily, when fully operational.

“Approximately 90 per cent of the land will be operated with contract farmers with the remainder utilised as a corporate farm and for educational training purposes by the leading investor, Dominion Farm,” an official at the state ministry of agriculture said.

The Minister for Agriculture Dr Akinwumi Adesina said during the signing of the MoU that approximately 300,000 tonnes of rice will be produced annually for the Nigerian marketplace, which now imports approximately 2 million tonnes of rice annually, thereby offsetting 15 per cent of rice import.

Our correspondent who could not get a copy of the MoU, has reliably gathered from sources that under the MoU, the Taraba State Government is expected to take care of land compensation for local farmers, construct access road to the farm for easy transportation, provide security for the farm and construct silos for rice storage, amongst others.

The Dominion Farm, on its part, is to build a training school in the area where farmers can be trained on modern methods of rice farming, encourage local farmers to be out growers and build social infrastructure such as electricity, water, school and health centre for the benefit of the host community.

Already, the Taraba State Government, in meeting its obligations, has commenced construction work on the access road linking from Tella to Dominion Farms in Gassol town.

Dominion Farms has so far trained 50 young men from the state in Kenya for six months to keep them abreast of modern farming techniques, including tractor operation, irrigation systems and farm management, amongst others.

The Chief Executive Officer of Dominion Farm, Calvin Burgess has also mobilised necessary farm equipment, including tractors, rice milling machines and irrigation facilities to the farm in Gasssol to begin full farming activities, according to officials at the state ministry of agriculture.

But hope of commencing farming activities at Dominion Farms, Gassol this wet season is suffering a serious setback at the moment due to the inability of the Taraba State Government to settle the issue of compensations to local farmers and other teething problems between the state government and Upper Benue River Basin Authority..

Investigations by our correspondent showed that the amount it will cost the state government to settle the compensation claims of local farmers for their fishes, farmland and economic trees is in billions of naira.

It was gathered that some of the farmers who were aggrieved over the nonpayment of their compensations have recently protested, forcing Dominion Farms to halt its activities pending when the matter is resolved.

Another challenge hampering the smooth take-off of Dominion Farm is the reported rivalry and opposition mounting from the Upper Benue River Basin Development Authority, an agency under the Federal Ministry of Water Resources.

It was learned that before the concession of the 30,000 hectares of land to Dominion Farm, Upper Benue Basin Authority had been cultivating a very sizeable hectares in the area and equally allocated some to local farmers who pay revenues in return.

It was gathered that in 1982, the Upper Benue River Development Authority had identified 38,000 ha of available irrigable land in Mutumbiyu, Gassol Local Government Area, but the authority could only acquire and develop about 3,000 ha for rain-fed farming.

Sources at the state ministry of agriculture told our correspondent that though the Upper Benue River Basin was on the ground for many years it, however, made no serious efforts in irrigation farming as it only concentrated on allocating portions of land to local farmers during rainy season, leaving large chunk unharnessed.

“They don’t have irrigation facilities on the ground. What they are doing is that in the rainy season, they will go and share some portion of land to local farmers and get some tips. Their mandate in the first place is not for farming, they are to operate in water resources”, an official at the state ministry of agriculture told our reporter.

Daily Trust further gathered that when the land (including where the Upper Benue was hitherto operating) was handed over to Dominion Farm, it was resolved that Dominion Farm be given free hand to operate while Upper Benue hands off from the area.
It was learned that some of the structures of Upper Benue Basin Authority were proposed to be converted into training school for Dominion Farms where about 1, 200 local farmers are expected to be trained annually to be able to key into the modern farming techniques at the Dominion Farms.

But reports from state government officials  have it that the Upper Benue Basin Authority became uncomfortable with the coming of Dominion Farms to the area and hence, has been allegedly working against the smooth operations of the farm, including pitching the local farmers against the Dominion Farm.

On the issue of compensation, it was learned that in May 2012, a land acquisition notice directed affected land owners to take part in an assessment for compensation. As a result, about 3,000 holders of land titles were said to have been identified as real land owners to be compensated.

However, local farmers said the area contains up to about 45,000 inhabitants and that government is yet to pay them their compensation, about three years after their farmland was handed over to Dominion Farms for cultivation.

When contacted, Taraba State Commissioner for Agriculture, Alhaji Isah Musa, said the government was making serious efforts to settle the claims of the local farmers.

He said the major challenge the government has been battling with is the one with the Upper Benue River Authority over the ownership of the land.

Alhaji Isah said that following the discussion they had with the Federal Ministry of Water Resources, the ministry under which the Upper Benue River Authority belongs, it has finally been resolved that the Upper Benue hands over to the state government to enable Dominion Farms operate there.

He said Taraba is one of the states that have great potential for rice production, including dry season farming, pointing out that the state is bounded by three rivers, namely, Rivers Donga, Taraba and Benue.