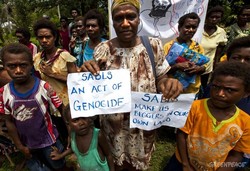 Listen to the audio

There are signs that land grabs in Papua New Guinea may start to decline, after a report from Oxfam exposed the extent of the involvement of Australia's big four banks.

And Prime Minister Peter O'Neill has announced government plans to cancel Special Agricultural Business Leases, while many of those are already granted are under review.

Both positive steps, but will there be substantive change on the issue?