Anti SAVANA: A program that could affect the lives of millions of peasants in Mozambique 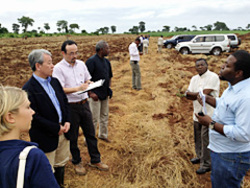 Anti SAVANA: A program that could affect the lives of millions of peasants in Mozambique

In 2009, the governments of Brazil, Japan and Mozambique signed an agreement to implement the so-called Cooperation for the Agricultural Development of the Tropical Savannah in Mozambique (Pro SAVANA). The Program has been promoted by the governments as a sustainable agriculture development project for the region. However, Mozambican organizations and movements, in addition to denouncing a “total lack of transparency, consultation and public participation”, are stating that the project threatens biodiversity, the lives of millions of peasants and consequently the production and food sovereignty of the country.

In an interview with Real World Radio, Anabela Lemos, chair of Justica Ambiental – Friends of the Earth Mozambique, sad that the goal of the program is to “implement large-scale agribusiness; bring in technologies, the experience and know-how of soy in Brazil and export the production to Japan: a path towards the destruction of peasant agriculture”.

The movements that oppose to the implementation of this program had an even clearer view of their goals after having access to a draft of the program´s Master Plan, not due to a dialogue with governments, but after the document was leaked.

In a letter signed by several organizations to denounce the Plan, they state that “it only considers how small farmers can support agribusiness”. Two guidelines included in the plan aim to this, according to the letter: “Drive farmers away from shifting agriculture and the traditional land management techniques to make them adopt intensive farming techniques based on commercial seeds, chemical production factors and private property titles; and push farmers to a production regime by contracts with agricultural and transforming companies”.

Lemos said that the government has not provided any answers to organizations about, for instance: the surface to be covered by the program or the number of people affected by it.

Still, the agribusiness actors seem to be quite certain about ProSAVANA´s goals. Brazilian agribusiness publication Dinheiro Rural published an article about the program called “Rumo a Africa”. In the article, the Nacala Corridor (where the project would take place) is described as “14 millions of hectares with potential to produce rice, soy, maize, cotton, sunflower and peanuts, which could benefit from privileged infrastructure: the Nacala port, the largest deep-water port in the east coast of Africa.

“This is perhaps the largest area to develop agriculture in the continent, with profits estimated between 18 and 23 percent annually”, said the coordinator of the Getulio Vargas Projectos Foudation, Cleber Guarany”.

In Mozambique there is widespread concern, since approximately 4 million peasants live in this area: “I believe that half of them would be affected one way or the other”, said the environmental activist.

Lemos concluded: “Peasants represent 80% of the work force in Mozambique and feed 90% of the country. They want to destroy all this, leaving it in the hands of multinational companies, which we already know how they act here in Mozambique”.