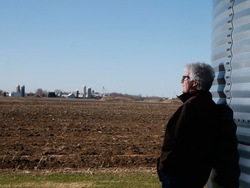 But as Serge Fortin sees it, he and his billionaire business partner Charles Sirois are simply reacting to reality: That as time goes by, Quebec’s crop farmers are finding it tougher to eke out a living even as the worth of their property increases, making it nearly impossible for some to pass on their lands to their sons and daughters at fair market value.

The two men are now two years into their farming company, called Pangea Terres Agricoles, and already it seems they’ve made as many enemies as friends with the new venture. As the world braces for a doubling in global demand for food during the first half of this century — a phenomenon that will put inconceivable pressure on already-limited agricultural resources — it’s clear Canada needs to figure out how to best position its farms to respond. But whether Pangea’s bigger-is-better model is a welcome part of the solution remains to be seen.

What we want is that a farmer becomes an entrepreneur, that it’s his business and that he generates spinoffs

“The joke is that when a farmer goes to the grocery store, he’s too poor to buy beer,” says Mr. Fortin, a farmer in his own right. “But when he dies he’s a millionaire. The problem is the structure of his capital. [And what we've done] is put passive capital to the service of the farmers. What we want is that a farmer becomes an entrepreneur, that it’s his business and that he generates spinoffs in the region where he lives.”

Pangea teams up with a crop farmer in a specific region of the province to create a joint venture, giving the entrepreneur 51% control and keeping 49%. The partners pool their farmland together with the aim of amassing at least 2,000 acres, several times more than a typical farmer holds on his own. The farmer does the labour while Pangea brings financial resources, managerial and logistics experience as well as potential supply contracts. They split the profit from production and decision-making. Each partner keeps the title to his own land.

The sheer scale of the new venture means costs are spread over more land, allowing the farmer to make more money than if he were plowing an average 300-acre farm.

So far, Pangea has inked six joint ventures with plans for two more this year and a move into Ontario. Total land volume under management is expected to total 12,000 to 15,000 acres by the end of 2014.

The company is also aiming to start primary transformation work soon at some sites, launching flour-making operations for example, to boost the income of the small number of farmers growing wheat.

As in many other corners of the world, farming is in decline in Quebec. Fewer farmers are working an ever-diminishing number of agricultural operations. And while their average annual revenue climbed 19% between 2007 and 2011 and the value of their assets grew 24% during the same time, according to Statistics Canada figures, they remain a heavily-indebted bunch.

The average age of Quebec’s 35,000 farmers at last count was 51. Mr. Fortin says the vast majority of what they produce is for domestic consumption while only a small portion is exported.

Among the many challenges farmers face, financing is near the top of the list. In that sense, they are no different than other small entrepreneurs.

Quebec has a government-sponsored organization called La Financière Agricole that offers crop insurance and financing backing to farmers as well as a farm succession program in partnership with Desjardins Group. Its portfolio of loan guarantees now tops about $4.4-billion, about half of all the farm financing in Quebec.

Pangea isn’t competing with the Financière, Mr. Fortin says. It’s just offering what it says it a sustainable way for farmers to grow their business without necessarily taking on more debt.

“We’re a catalyst, we give our partner scale,” Mr. Fortin says. “We can multiply their capacity by four or five. And we can lower their costs. So the increase in profitability is substantial.”

At the moment, the money to finance Pangea’s land and equipment purchases comes from Mr. Fortin’s and Mr. Sirois’s own savings. Both have substantial fortunes, accumulated after years working in the telecom industry. But they’re looking for outside investors such as pension funds.

“If you start with $1-million to buy a farmland, you don’t even know where the key is to start the tractor,” Mr. Fortin says. “It’s not structured or organized. We’ve created a model to allow the financial world to have a structure in place so they can invest.”

Bank involvement in buying farmland has not worked out so well in the recent past. National Bank bought a swath of property in the Lac-Saint-Jean region but sold it to Pangea amid complaints that the bank was competing against the same farmers it was lending money to.

Pangea has met with industry players throughout the province to explain its business model, but there are many in Quebec who see little difference between what National did then and what Pangea is doing now. They argue that both are non-operators seeking to influence the industry.

“They are competing with farmers with financial means that producers will never be able to rival. And their primary objective is not at all to practice agriculture and live from it and feed people but rather to make a profit.”

The Fédération de la relève agricole du Québec, a group focused on providing resources to the next generation of farmers, has said that Pangea “contributes to the financialization of farmlands” and that the concentration of its assets is putting an upward pressure on prices.

But those who have signed up with Pangea like the arrangement.

“The main advantage for me partnering with Pangea is that it will allow me to be comfortable financially and realize a dream to work with my wife on our farm,” said Patrice Garneau, 34, a dairy farmer who also grows crops.

Mr. Fortin, 61, has heard the criticism. He says people fail to understand Pangea’s model, which is based on the belief that the small-scale farming that dominates Quebec has worked fine for generations, but is not optimal for the future. Pangea is not a land speculation company, he says but rather a farm operations company.

“There’s a very big emotional side to farming and we understand that,” he says, adding his own family has been farming for several generations on Montreal’s north shore. “Every week we get calls from people across Quebec wanting to sell their land. And in many ways, [that saddens me]. We’ve got to get those lands producing.”