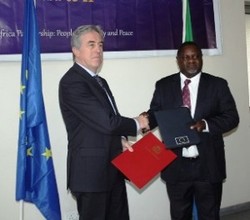 The head of the delegation of the EU to Tanzania, Ambassador Filiberto Sebregondi, and Tanzania's Permanent Secretary in the Ministry of Finance, Dr Servacious Likwelile.

The European Union (EU) has provided a grant of 59.5 million euros (approximately 134bn/-) for improved agri-business and trade facilitation.

The financing agreements, which were signed in Dar es Salaam, are part of the European Development Fund in which they will support agriculture, roads, energy and ultimately trade and development.

From the agreement signed, two major projects will be supported, which are Southern Agricultural Growth Corridor of Tanzania (SAGCOT) and the One Stop Inspection Station project (OSIS).

Moreover, the Department for International Development (DFID), the Rural Energy Agency (REA) and the Belgium Technical Cooperation are co-financing the SAGCOT project.

Trademark East Africa will support OSIS in which both projects aimed at stimulating sustainable economic growth.

The head of the delegation of the EU to Tanzania, Ambassador Filiberto Sebregondi, said that economic growth allows youth to find work and be proud of what they have achieved and to make their dreams into reality.

“The financial agreements we have signed are about economic growth and wellbeing prospects and will result in increased number of jobs, declining commodity price and continued economic growth,” he said.

The envoy further added that the strength of ‘Kilimo Kwanza’ and Big Results Now Initiative, the SAGCOT project will present similar benefits in terms of transport through the improvement of road infrastructure in the fertile Kilombero region.

Speaking about OSIS, Ambassador Sebregondi, said that the project will assist in regional trade facilitation by smoothing the movement of goods between the port of Dar es Salaam and inter-land markets.

The Permanent Secretary in the Ministry of Finance, Dr Servacious Likwelile, said that the strategic shift to engage private sector has come about on the recognition that depending on financing from traditional sources alone would not be adequate to close the infrastructure gap.

“The main intention is to offer opportunities for small holder producers to engage in profitable agriculture by developing stronger linkages between smallholders and commercial agribusiness,” said Dr Likwelile.

Expounding further, he said that the plan to establish OSIS will form an important part of the central corridor transport networks in terms of reduction of time and costs associated with transporting transit goods, increase road safety and reduce congestion.