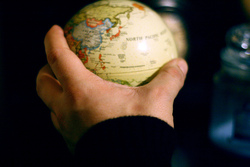 The idea that there is a “land grab” taking place in developing nations began with the publication of a report, Seized!, by the NGO Grain. This rang an alarm bell about large-scale land acquisitions – particularly by a number of Asian countries and Gulf States, which are acquiring millions of hectares of fertile agricultural land, predominantly in Africa.

Corporations and states including the US, European nations, and the rising “BRIC” economies of Brazil, Russia, India and China are all involved in this voracious purchasing of land. And despite the huge differences in the countries and localities where the land is purchased, the outcome is surprisingly similar: millions of hectares of farmland, as well as forests and peatlands, have been rapidly converted into huge mono-cropped plantations of soy, oil palm, and other cash crops.

This process particularly hits pastoralists, smallholders and vulnerable landless groups. What is striking is that in most cases land grabbing takes place with full support of governments which are happy to swap land for foreign direct investment.

As a rule, insufficient consideration is given to the livelihoods, rights and needs of local people. Land sold to investors is often taken away from locals who are not even informed, and are often forcefully removed. To the extent that investments generate benefits such as employment, those from the land are usually bypassed in favour of workers from elsewhere.

The global land grab is a phenomenon against which those whose land is being grabbed seem defenceless. It is an area in which multilateral organisations, such as the World Bank, as well as civil-society organisations and NGOs have become increasingly vocal, and which has attracted greater academic interest.

Most early research focused on explaining the land grab narrative in terms of hectares and numbers of people affected, in an effort to uncover global trends and examine case studies. In our research, we have adopted instead an in-depth and comparative approach.

By examining Africa, Latin America and Asia country by country, a number of interesting themes emerge: urban land grabbing in Kenya, Ethiopia’s new agricultural investment policy, genetically modified soy cultivation in Argentina, residential tourism in Costa Rica, water grabbing in Peru and Ecuador, new land conversions in Vietnam, and the Gulf States' investments in Indonesia and the Philippines. There are differences and similarities, local variations and more general trends. But it is clear that this global land grab really exists, and that it’s impact cannot be expressed in hectares and statistics alone.

An all too-easy purchase

What is striking is that it has not been merely the demand for food or biofuels that has led to this land rush. In fact, a whole set of earlier policies has paved the way. Large-scale land acquisition started to take place as a number of conditions simultaneously fell into place.

Huge tracts of land, under-exploited due to poor agricultural policy or decades of neglect, was made available. Foreign state aid donors emphasised the need to attract foreign investment. Land laws were modernised to make buying, selling and leasing land easier in many countries. And in many cases, institutional weaknesses or outright corruption eased through deals.

National governments were supposed to decentralise, stepping back in favour of local governments and opening up to market forces. However, local governments have often not been strong enough to deal with foreign investors, while in other cases they are merely extensions or appointees of the same political elites that run national governments, rather than genuinely representing local interests. The global land grab is not the consequence of ad hoc crises; it is the logical outcome from the policies and political environment laid down before it.

So while what is happening today is to a large extent a historical continuation, it is also very different from the events of the past. In countries such as Argentina or Costa Rica, land acquisition and “foreignisation” has taken place for decades, if not centuries. For example, the major US fruit growers' acquisition of land throughout Central America during the early and mid-20th century. In Kenya, the current land grab echoes its clear precedent under colonisation by the British. Processes are rarely transparent – not in developing countries praised for “good governance”, and not even in cases of Western companies that boast of their “corporate social responsibility”.

The global land grab has implications for transnational connections and power relations: it reshapes the geopolitical order, yet is equally a manifestation of a world order that has changed as economic power swings toward China, India, and developing economies. Much attention is paid to improving rules or regulations through land titling programmes, implementing the FAO voluntary guidelines, codes of conduct and other institutional solutions. However, the problem is often not so much regulations as the failure to implement them or a lack of practical control.

As we have argued, a framework of accountability for large-scale land acquisitions must not only be limited to private companies, nor to governments or public bodies. To be effective it must be constructed as an integrated system of checks and balances that stretches from international trading regulations through national laws to local enactments, to ensure that all the main players of the game are playing under the same rules.