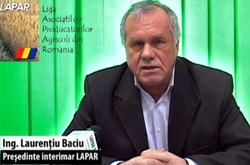 According to Laurentiu Baciu, foreigners cultivate land in Romania, taking advantage of the fertile land, the small price per hectare and the cheap labour force but sell the crops in the countries they come from. These crops are then exported to Romania and sold to Romanian consumers for a prices bigger than the domestic ones.

On January the 1st, 2014 Romania officially granted foreign citizens the right to directly purchase farmland.  Prior to this date, foreign citizens were allowed to buy farmland in Romania only after setting up a Romanian firm. Experts have warned that the purchase of farmland, by foreign citizens, will increase significantly and that the state should thoroughly control this type of transactions. In 14 years alone, 3 million hectares of farmland have been purchased in Romania, which means that a third of Romania’s fertile land is now owned by Italian, Danish, German, Norwegian, Dutch, Hungarian and Lebanese citizens. Officially, companies running on foreign capital have already bought 1 million hectares of farmland, and have signed lease contracts for another 2 million hectares.

According to Laurentiu Baciu, head of League of Romanian Farmers' Associations, foreigners cultivate land in Romania, taking advantage of the fertile land, the small price per hectare and the cheap labour force but sell the crops in the countries they come from. These crops are then exported to Romania and sold to Romanian consumers for a prices bigger than the domestic ones: "We must face the truth. Romania has had private agriculture for only 20 years. Foreigners, on the other hand, have a well-established tradition when it comes to private agriculture. We’ve only made small steps in setting up farming units, in their modernization and in making profit. Financial resources are scarce.  Abroad, banks offer preferential interest rates of 1 to 2% to buyers of farmland in Eastern Europe while governments also support these initiatives.  We get nothing of that. There are also large areas of uncultivated farmland in Romania. Following the reform in 1991, people were given back their land, without being asked whether they needed it, and if they can cultivate it, and now they find themselves in the situation of having to sell it to the first buyer. In other countries, the price of farmland is 4 or 5 times bigger than in Romania. If the average price per hectare stands at 2,500 Euros in Romania, in Belgium a hectare of farmland sells for 28,000 to 30,000 Euros, while in France it sells for 20,000 to 25,000 Euros. That’s why they rush in to buy land in Romania.”

Most foreign investors bought fertile farmland in the Calarasi, Ialomita and Banat regions. Italian investors have particularly invested a lot, purchasing some 250,000 hectares of land, most of which in Western Romania. High on demand are plots of land that are pooled together and highly productive. The hesitation of landowners and farmers in selling their small plots of land, inherited from their parents, makes farmland price report a constant upward trend. For instance, in Intorsura village in Dolj county, prices for arable plots of land have increased from 600 euros some years back to 1,500 euros in poor regions, or 2,000 or even 3,000 euros for abundant farmland. Local authorities urge the locals not to give up the farmland on which they make a living. Constantin Carmen is the Mayor of Intorsura.“Many investors have expressed an interest in the region, but I’ve advised people against selling, because later they might regret it. Farmland prices will go up. Unfortunately, people facing difficulties do sell”. In turn, Lipovu Mayor Dumitru Dobrescu has also urged people not to sell: “There’s this Italian man who bought 650 hectares of land in Lipovu. There are other associations such as Cervina, currently leasing 246 hectares, and another three groups with approximately 100 hectares. Cervina upped its prices this year, from 2,500 lei two years ago to 6,000 lei, in order to buy more land. Unfortunately, more people are selling their properties, which means this country will soon be left without farmland of its own.” Farmland in Moldova and northern Transylvania is cheap, but too scattered. For this reason, there are few agricultural operations near Salaj, while the biggest farmers there are foreign business people who bought large areas of land in the 1990s. Vasile Lazar is the Mayor of Maeriste village.

“There is a Romanian company with an Italian shareholder that bought a certain area of land over the course of several years. The company works the land itself, leasing part of it to locals. We are talking about some 500 hectares, of which 100 are bought. The current price may go as high as 10,000 lei per hectare, some 2,500 euros.” Starting April, farmland is to be sold under new regulations. Romanians must observe a new set of procedures in order to be allowed to sell their land. First they must notify the local town hall with respect to their intention to sell, while the sale cannot be completed any sooner than 30 days. The seller must specify a price, while the town hall will make the price public, informing co-owners, the family, landholders, neighbors and the entire village. They have priority rights to buy the land. Romania has some 14 million hectares of farmland at present, of which 10 million hectares in use. RRI