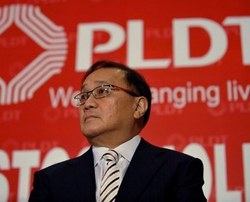 First Pacific Managing Director Manuel V. Pangilinan said there is a
strong interest to invest in the mill, which is in a 50-hectare
property in the estate. “We are interested in sugar in general because Indofood is in sugar plantation and sugar milling and refining,” said Pangilinan.
today said that two years after the Supreme Court decision ordering the distribution of Hacienda Luisita, President Aquino’s relatives, the Cojuangcos of Tarlac province still control the more than 6,000-hectare sugar estate and warned of intensified land-grabbing and denial of farmers’ rights with the “imminent” entry of businessman Manuel V. Pangilinan in Central Azucarera de Tarlac.

“The President and his family have been bastardizing the Supreme Court
decision for two years now. Control over the lands remains with the
Cojuangcos despite the government’s payment of almost half a billion
pesos,” says KMP chair Rafael Mariano.

On April24, 2012, voting 14-0, the highest tribunal ordered the total
distribution of Hacienda Luisita to more than 6,000 farm worker
beneficiaries and pay the farm workers P1.3 billion.

“Worst, after two years political maneuvers never stopped. The
Cojuangco-Aquinos continuously wields their political power to deny
the farm workers of their rights to the land,” Mariano said.

He said that “with the help of the Aquino-controlled Department of
Agrarian Reform and state security forces, the Cojuangcos managed to
deceive the farmworkers in its much-hyped ‘tambiolo’ land reform.”

“Today, the Cojuangcos are maneuvering to further strengthen control
over the lands by intensifying the practice and use of Hacienda
Luisita lands as a financial instrument, increased land-use
conversion, and land speculation,” Mariano said.

First Pacific Managing Director Manuel V. Pangilinan said there is a
strong interest to invest in the mill, which is in a 50-hectare
property in the estate, since Indofood is a major plantation operator
in Indonesia in palm oil, sugar, rubber, coffee and cacao.

Indofood, controlled by the Salim family, is engaged in oil-palm
cultivation and milling; as well as the production and marketing of
branded cooking oils, margarine and shortening. It is also engaged in
the cultivation and processing of rubber, sugar cane and other crops.

In November last year First Pacific bought about 31 percent of Roxas
Holdings Inc. (RHI).  A month later First Pacific increased its stake
in RHI to about 34 percent and shelled out about P2.47 billion by
buying out other minority holders. Roxas and company sold up to 34
percent of its 66-percent stake in RHI for P2.23 billion at P8 per
share.

“These recent developments in the sugar industry clearly demonstrate
that MVP’s acquisition and entry in Hacienda Luisita is imminent. The
farm workers of Hacienda Luisita should prepare for another round of
intensified agrarian unrest,” Mariano warned.

The KMP is pushing for the enactment of House Bill 252 or the Genuine
Agrarian Reform Bill (GARB) that seeks the nationalization of all
agricultural lands and the subsequent free distribution of lands to
landless tillers.