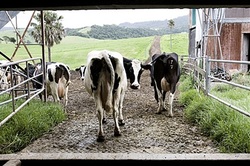 The Aquila Group says it will prioritise buying dairy properties in areas in the south east of Australia, including parts of Tasmania and Victoria, with relatively favourable and predictable climates.

The "incredibly high" prices of New Zealand dairy farms have prompted Aquila Capital to switch its investment drive to Australia, where the dairy sector offers "the best risk-adjusted returns in global agriculture".

The alterative asset manager, which in all sectors has assets approaching $10bn, said it was in agriculture keeping dairy as its priority investment area, citing the support to the market from strong growth in Asian consumption.

"[This] might lead to a potential demand overhang for dairy products of as much as 5bn litres by 2020," said Detlef Schoen, head of farm investments at German-based Aquila, citing analysis of OECD data.

But the group, which has directed primarily at New Zealand the $500m it has raised since 2007, said it would direct at Australia the proceeds of a fresh capital raise, of up to $400m, from institutions.

The appeal of New Zealand as an investment target "has changed in the last 12 months", said Andrew Sliper, senior manager farm investments at Aquila – and a New Zealander.

"As a result of the interest in New Zealand, land prices have gone up incredibly high," Mr Sliper told Agrimoney.com.

New Zealand farm prices were worth a 20% premium to those in Australia thanks to factors including a lack of stamp duty and capital gains tax.

"But at the moment we are seeing prices in New Zealand more than double those in Australia."

Separately, the Real Estate Institute of New Zealand said that the pace of growth in New Zealand dairy farm prices had slowed to 1.3%, year on year, in the January-to-March period.

Mr Sliper termed the slowdown "surprising", and potentially a reflection of the spread of the dairy sector into more "marginal" areas, where profitability prospects are lower.

"From what we are hearing from the core area, prices are pretty strong," he said.

Indeed, the price rises have supported a internal rate of return from Aquila's realised agricultural investments of 14% so far.

The institute highlighted strong demand for dairy farms in many regions, including in Canterbury, in the west of South Island, where a 1,284-hectare dairy unit sold for NZ$64.9m.

Mr Sliper said that the group would, in Australia, prioritise buying dairy properties in areas in the south east, including parts of Tasmania and Victoria, with relatively favourable and predictable climates.

He also highlighted the benefits in Australia of operating in a country which is a major producer of grain, at relatively favourable prices, offering good prospects for feed supplies, besides having political stability.

"If you were in Ukraine, you would probably be having some sleepless nights," he said.

"You might have had the prospect of a higher return, but you are dealing with the risk of being in that country."