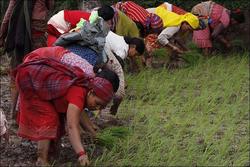 KATHMANDU, APR 16 - A technical committee formed by the Ministry of Agricultural Development to collect suggestions to give final shape to the draft Agriculture Development Strategy (ADS) has recommended barring foreign investment and land ownership in primary farm production.

The committee has also suggested imposing a blanket ban on genetically modified organism (GMO) foods, crops and seeds. These are the major appeals contained in the 10-point charter of demands submitted by farmers’ groups for inclusion in the ADS.

The ADS is a farm blueprint that is expected to set out a strong and sustainable future path for Nepal’s agricultural sector for the next 20 years.

“The committee has recommended imposing a ban on primary production and owning land for the same as demanded by farmers’ groups,” said Tek Prasad Luitel, co-spokesperson of the ministry. “However, foreign direct investment will be allowed in agriculture processing and marketing.”

Luitel added that the government was unable to prohibit entry of genetically modified (GM) crops or biotech crops into the country.

The committee will be sending its recommendations to the main advisory committee led by the ministry’s secretary. After the committee okays the draft, it will be sent to the Cabinet for its approval.

Likewise, the committee plans to recommend forming a Farmers Commission to ensure farmers’ rights including prioritizing production of local and hybrid seeds to make the country self-reliant in seeds.

Meanwhile, the ministry is scheduled to hold workshops and consultations in a number of districts to provide information on the ADS and analyze problems faced by farmers so that they can be incorporated in the draft. “The ministry plans to finalize the draft in a month,” Luitel said.

The draft ADS, supported by the Asian Development Bank (ADB) and a number of other donors, has been almost 26 months in the making.

The ADB had presented a draft prepared under the four strategic pillars of governance, productivity, profitable commercialization and competitiveness to the ministry on July 2, 2013.

The ADS has targeted boosting the average annual growth to 5 percent from the present 3 percent for the agricultural sector and increase land productivity to US$ 5,000 per hectare from the current US$ 1,600. It also aims to increase labour productivity to US$ 2,000 from US$ 800 per worker. Likewise, exports of farm items have been targeted to increase to $1.6 billion from $250 million through the implementation of the ADS.

The document has envisaged increasing round-the-year irrigation coverage areas to 80 percent from the current 18 percent. One of its ambitious targets is to halve poverty in less than 10 years through an agriculture-led economy.