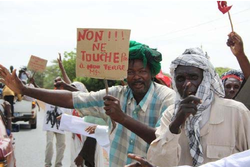 Over nine thousand farmers and pastoralist in St. Louis in the north of Senegal are facing possible evictions from their land as multi-national agro-industries scramble for agricultural land in the region. Speaking to the African Press Agency on Sunday, Fulani cattle herders of the local community in Ross Bethio accused Senhuile â€“ Sénéthanol, an Italian multinational company of encroaching on their grazing and farm lands.

They claimed that more than 37 villages are currently deprived of their land thanks to activities by the company which is based in St. Louis.

The local population said they have lost over twenty six thousand hectares, leaving them without the means to continue herding cattle and farming their lands.

"We prefer to die than to allow our land to be taken away by a foreign company. We shall not succumb to this new form of colonization" said Gorgui Sow, a member of the youth platform in Ndiael local community to fight the "illegal occupation".

"The company has made us prisoners in our own land. We cannot move about with our animals because of their activities. They have destroyed our farms and polluted our lakes which are the only source of drinking water for of us and our animals," an angry young cattle herder declared.

The community is being helped in the fight to regain lost land by three NGOs, Action Aid Senegal, Congad and Wetlands Africa who are said to be determined to regain for the local people what they described as "stolen property"

Aisata Dia of Action Aid Senegal and also a member of the village platforms said Senhuile-Senthanol has violated the code of the environment with the firm engaged in aerial spraying of pesticide and causing serious health hazards to the local community.

However, the operations manager of Senhuile-Senthanol Ibrahima Sow, dismissed criticism of the firm, saying their agricultural project in the area is in line with the Senegalese government’s Plan Senegal Emergent project.

He said since the start of their operation in the area, they have employed more than five hundred people working on their farms while the company has sunk many bore holes to help the local community gain access to clean drinking water.