Egypt eyes more Gulf investment on back of agricultural deal 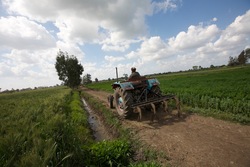 Egypt eyes more Gulf investment on back of agricultural deal

Egypt plans to lease 60,000 feddans (25,200 hectares) of agricultural land this year to a firm affiliated with an Arab investment body, its agriculture minister said, in a bid to attract more investment from its Gulf allies.

Egypt is getting billions of dollars in aid from Gulf Arab states to help stimulate its economy and keep its politically charged streets calm in the hope that investors and tourists will return.

“We are discussing some alternative financing plans for our country. We plan to give some 60,000 feddans this year to a company shared with the Arab Authority for Agricultural Investment,” Agriculture Minister Ayman Abu-Hadid told Reuters on Tuesday on the sidelines of an Arab finance ministers summit in Tunis.

The Arab Authority for Agriculture Investment and Development (AAAID) is an organisation of 20 Arab and African states, all keen to secure food supplies for their people.

In 2009 the group launched a holding company to attract investments, especially from oil-producing Gulf states, which have invested in farmland across African and Arab countries.

The Egyptian minister declined to say whether the land would be used for wheat or other crops or to disclose its location.

Egypt uses a combination of local and imported wheat to produce subsidised bread, which costs the government around 21 billion Egyptian pounds ($ 3 billion) a year

A Gulf official, asking not to be named, said the AAAID is seeking more land from Egypt and other countries such as Morocco.

Morocco aims to quadruple the amount of state-owned land it leases to farmers and investors to increase production and speed up modernisation of farming, Moroccan officials said earlier this year.